Sheila Jackson Lee (born January 12, 1950) is a very liberal Democrat representative of Texas 18th district covering Houston. Lee is another leftist Democrat that simultaneously despises capitalism and embraces socialism. She is a member of over 50 different caucuses, notably the Progressive, Black, and Out of Iraq caucus. Her committee assignments in the U.S. House include Homeland Security and Judiciary. Lee's largest campaign contributor is the Service Employees International Union. She is very anti-gun and anti-American.

Sheila Jackson Lee is a typical moonbat with a volatile temper that throws outrageous verbal bombs that have people scratching their heads "Are you serious?" In June 2011, Rep Peter King held a congressional hearing on Muslim radicalization in U.S. prisons. Defending her Muslim campaign contributors, Lee said "that investigators needed to analyze "Christian militants" in America because they too might try to bring down the country.” Other notable statements include "Repealing ObamaCare Violates Constitution." In Defense of NPR, Lee Wants to 'Defund' Fox News, which of course is not funded by the government. Lee asked a guide whether the Mars Pathfinder had taken a photograph of the flag planted on Mars by Neil Armstrong in 1969, Amstrong planted a flag on the moon. Lee spoke at an NAACP meeting (to applause) where she derided the Tea Party movement as a racist phenomenon. Lee said North and South Vietnam had managed to forge a peaceful relationship with one another in the years since the Vietnam War, South Vietnam ceased to exist on July 2, 1976. Lee calls on the government to stop the policy of giving hurricanes “lily-white” names, adding that she hoped the weather establishment in the future “would try to be inclusive of African American names” such as “Keisha, Jamal and Deshawn.” Lee has called for improved relations between the United States and Hugo Chavez’s Venezuela. 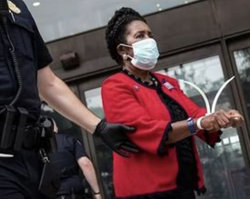 During the Kavanaugh hearings insurrection, the home addresses and personal phone numbers of Republican Senators were published online from IP addresses originating within the U.S. House of Representatives.[1] An aide to Jackson Lee was arrested and charged with threats in interstate communication, unauthorized access of a government computer, identity theft, witness tampering, second degree burglary, and unlawful entry for illegally posting the personal information of several Republican senators (including Lindsey Graham, Mike Lee and Orrin Hatch) on Wikipedia via a House computer;[2] he had also sent an e-mail to a witness who confronted him on his illegal activities, threatening to post the health information of the senators' children, as well as the senators' social security numbers, if the witness said anything.[3] The staffer faced up to 50 years in prison if convicted,[4] [5][6][7] and was eventually sentenced to four years in prison.[8]

Jackson Lee was arrested at the 2021 U.S. Capitol insurrection.[9]

Lee introduced into Congress in 2021, HR 127 which would require a national firearms registry to be created and mandate national licensing for gun owners, both of which violate the Second Amendment to the U.S. Constitution. HR 127, if enacted, would assist the government in gun confiscation and it would provide criminals the information they need to break into private homes and businesses and to steal guns. The registry would require gun owners to go through a psychological evaluation before they purchased a gun.[10]