Sir Lawrence Alma-Tadema (Dronrijp, 1836 - Wiesbaden, 1912) Dutch painter. He was one of the most successful artists of the XIX century and internationally famous, immensely popular. In 1870, Alma-Tadema moved to England, where he was to spend the rest of his life. Alma Tadema produced more than 400 paintings. [1] Alma-Tadema is admired for his superb draftsmanship and "real to life" depictions of Classical antiquity. In 1879, he was elected member of the Royal Academy of Arts and in 1899, Sir Lawrence was knighted by Queen Victoria.

Lawrence Alma-Tadema is one of the most highly renowned romantic artists of late 19th century in Britain. He was born in the Netherlands as Laurens Tadema, to the family of the town notary. There he studied painting in the Antwerp Academy, and art and history under the guidance of Louis de Taye, a Professor of Archaeology. Later he moved to London; as he tried to make his niche in the art world, he changed the spelling of his first name to the more English “Lawrence,” and included his middle name “Alma” as part of his surname. [2] A Collection of Pictures at the Time of Augustus, 1867. 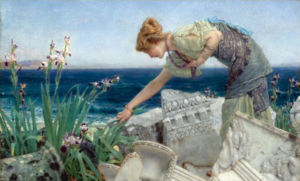