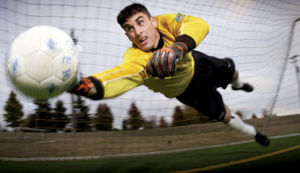 Soccer is a sport played with a round ball propelled by a player's foot (hence "football"). A team scores points by kicking the ball into the opponent's goal. Except for "goalkeepers", players, with exceptions, may not touch the ball with their hands or arms.

The game is played between two teams of 11 players (10 out-field players and one goalkeeper each). In official play, there are two 45 minute halves separated by a 15 minute break known as half-time. In knockout cup games, if a game is tied after 90 minutes, there is often an additional period of play consisting of 2*15-minute halves. If the scores are still level, the result is decided with a penalty shootout. The set of rules used in soccer are called the Laws of the Game.

The game is played on a grass (or artificial grass) pitch with dimensions 90-120 m (100-130 yards) in length and 45-90 m (50-100 yards) in width.[1] A goal is scored when the (spherical) ball is propelled into the opposition net. The distinctive feature of the game is that, with the exception of the goalkeepers, players, most of the time, may not touch the ball with their hands or arms intentionaly.

The game better known outside the U.S. as "football". The word soccer derived in England as slang for "Association Football", [2], much like "rugger" is slang for rugby.

It is the most popular team sport in the world[Citation Needed], described by the legendary Brazilian player, Pele, as "The Beautiful Game". Its governing body is FIFA (Fédération Internationale de Football Association).

"Soccer" is the term used in North America, Australia and some other countries. It is most commonly known as "football" (Spanish fútbol or futbol) elsewhere.