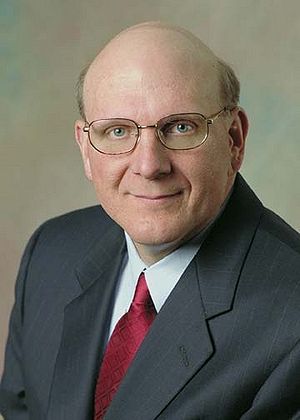 Steve Anthony Ballmer (born March 24, 1956 in Detroit, Michigan) is the current CEO and one of the funders of Microsoft Corporation. He was ranked the nineteenth richest person in the world in 2007 by Forbes magazine, with an estimated net worth of $12.4 billion. Steve Ballmer's father, a Ford Motor Company employee, was a Swiss immigrant; his mother was a Jewish American.

Ballmer is a liberal elitist who strongly supports gun control and gun free zones and along with Bill Gates and Michael Bloomberg far outspent the NRA to multimillion-dollar bankroll Washington State Initiative 594.[1] (See Northwest Firearms Forum, NRA on 594, VoteNo594.com) The newly passed law creates a new progressive police state bureaucracy with so-called "universal background checks" (except for criminals who never follow laws) and makes it a felony to temporarily loan a gun to a relative or friend even while you are at the gun range practicing together.