The Supreme Court of the United States (SCOTUS) is the highest court of the judiciary of the United States of America. The Court accepts for substantive review (known as granting a writ of certiorari, or often shortened as "grants cert") only about 75 out of 7,500 petitions filed in it each year. And not all of those result in an actual court hearing: the court may grant cert in a case similar to one where the Court did render an opinion, but then instead of a hearing will remand (return to the lower court) the case to reconsider its decision in light of the Court's opinion in the similar case.

The Constitution does not specify the number of Justices on the Court. The Judiciary Act of 1869 set the number at the current nine, consisting of eight Associate Justices and one Chief Justice. To assist them there are many clerks, guards, and staff. Cases are heard en banc whenever the Court is in session. Historians generally divide Court history into eras named after the Chief Justice then presiding (e.g., the Rehnquist Court and the Warren Court). 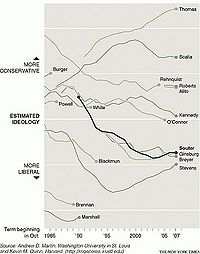