Conservapedia has had over 76,000,000 page views and over 566,000 page edits. The truth shall set you free. Are you a fan of Conservapedia and do you want some suggestions for letting more people know about Conservapedia? If so, please go here.

To celebrate the Christmas season, there is a Conservapedia:Christmas Campaign! To help out and become eligible for awards, please see the Campaign page.

Noh Theater is the traditional Japanese performing art, which combines the disciplines of Noh drama and Kyōgen. It developed during the 14th century's Muromachi period (1333 － 1573), although it's roots can be traced even further back to the 8th century. It is the world's oldest existing form of theater.

In 2006, the prestigious science journal Science reported concerning the United States: "The percentage of people in the country who accept the idea of evolution has declined from 45 in 1985 to 40 in 2005. Meanwhile the fraction of Americans unsure about evolution has soared from 7 per cent in 1985 to 21 per cent last year."[9]

"Now when Jesus was born in Bethlehem of Judaea in the days of Herod the king, behold, Wise-men from the east came to Jerusalem, saying, ﻿Where is he that is born King of the Jews? for we saw his star in the east, and are come to worship him"

"A day without laughter is a day wasted." 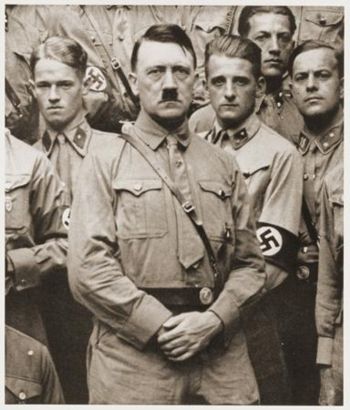 Adolf Hitler's Mein Kampf was a work which contained evolutionary racism.[1] In his work Mein Kampf, Hitler wrote of "Monstrosities halfway between man and ape" and decried Christians going to "Central Africa" to set up "Negro missions," which Hitler stated resulted in the turning of "healthy . . . human beings into a rotten brood of bastards."[2] Adolf Hitler also wrote the following evolutionary racist statement in Mein Kampf: "The stronger must dominate and not blend with the weaker, thus sacrificing his own greatness. Only the born weakling can view this as cruel, but he, after all, is only a weak and limited man; for if this law did not prevail, any conceivable higher development (Hoherentwicklung) of organic living beings would be unthinkable."[3] Charles Darwin was also a evolutionary racist. [4] Prominent evolutionist Richard Dawkins stated the following regarding Hitler: “What’s to prevent us from saying Hitler wasn’t right? I mean, that is a genuinely difficult question."[5]

File:Hunger(3).jpg
Per capita atheists and agnostics in the United States give significantly less to charity than theists even when church giving is not counted for theists.[6][7][8]
Retrieved from "https://www.conservapedia.com/index.php?title=Template:Mainpageleft&oldid=598596"
Category: