Did the church fathers affirm a Genesis flood?

Did the church fathers affirm a Genesis flood? Is a unified theory of physics possible?

Atheists have wasted billions of dollars in futile search for a unified theory explaining light and matter. If they simply read Genesis 1 with an open mind, they would realize that light and matter were completely different creations at different times, with no unity between them: Biblical_Scientific_Foreknowledge#Impossibility_of_a_Grand_Unified_Theory. 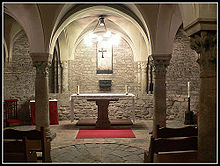 Question Evolution! Campaign working on getting into 50+ colleges and... Conservapedia shatters our record for unique visitor traffic for the entire month of February, well before the month has concluded.

On February 14, 2012, The Daily Telegraph reported concerning a radio debate: "Dr. Fraser skewered the atheist campaigner Richard Dawkins so fabulously, so stylishly, and so thoroughly that anti-religion’s high priest was reduced to incoherent mumbling and spluttering."[1]