Conservapedia has had over 57,100,000 page views and over 485,000 page edits. The truth shall set you free. Are you a fan of Conservapedia and want some suggestions for letting more people know about Conservapedia? If so, please go here. 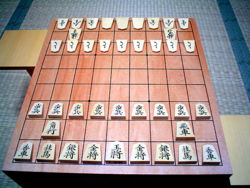 A shōgi board (shōgiban) showing the normal markings for the pieces on the near side, and those of the promoted pieces on the far side. The small tables are for retaining captured pieces, prior to captive dropping.

Shōgi (将棋), or Japanese chess, is a two-player, strategic, turn-based board game and is the Japanese form of the game which is known in the West as Chess, or more correctly, 'International Chess'. Article of the Year: Atheism

Discover what Wikipedia, the public school systems, and the liberal media don't want you to know about atheism.

And shewing mercy unto thousands of them that love me and keep my commandments.

Art is contemplation. It is the pleasure of the mind which searches into nature and which there divines the spirit of which nature herself is animated.

This view is of Delicate Arch with the La Sal Mountains in the distance.

Adolph Hitler wrote the following evolutionary racist statement in Mein Kampf: "The Germans were the higher race, destined for a glorious evolutionary future. For this reason it was essential that the Jews should be segregated, otherwise mixed marriages would take place. Were this to happen, all nature’s efforts “to establish an evolutionary higher stage of being may thus be rendered futile.”[2]. For more information please see: Social effects of the theory of evolution.

Quote of the Racist Charles Darwin Charles Darwin wrote in his work The Descent of Man and Selection in Relation to Sex the following racist statement: "At some future period not very distant as measured by centuries, the civilised races of man will almost certainly exterminate and replace the savage races throughout the world. At the same time the anthropomorphous apes...will no doubt be exterminated. The break between man and his nearest Allies will then be wider, for it will intervene between man in a more civilised state, as we may hope, even than the Caucasian, and some ape as low as the baboon, instead of as now between the Negro or Australian and the gorilla.[http://www.gutenberg.org/dirs/etext00/dscmn10.txt
]
Retrieved from "https://www.conservapedia.com/index.php?title=Template:Mainpageleft&oldid=516910"
Category: