We have become the 4th-most-commented-upon article on the nj.com website, where a recent comment there is "I am thankful that [my children] did not have to sit in public school and learn that ... God does not exist" - posted by "homeschoolgood" against the liberal Newark Star-Ledger article on Conservapedia and homeschooling. In February 2009, President Obama signed the American Recovery and Reinvestment Act, raising the federal deficit to 9% of total U.S. economic output. By the Spring of 2011, the resulting stimulus of consumer spending on gasoline prices at the pump recovered to a national average of $3.88, the highest pump prices since August 2008, before the Crash of 2008. But the promised improvement in job creation has yet to trickle down. 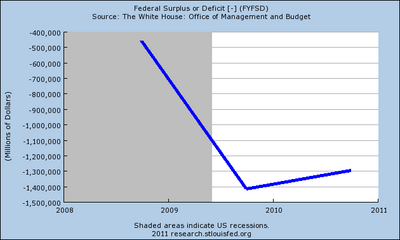