The theory of an old universe is contradicted again, this time by discovery of planets that formed "at dawn of universe". [2] How many counterexamples to an Old Earth does an atheist need in order to start opening his mind?.

Without Fidel Castro's tyrannical presence, a Cuban shouted out “Libertad!” (Freedom) and “Down with Communism!” (in Spanish) last Monday before the papal Mass. Communist officials then beat him "violently with a folded gurney." The Miami Herald eventually reported on this, but the New York Times has not despite public demands by congressmen for his release. [3] 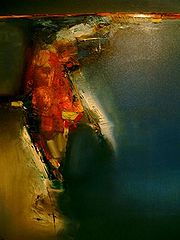 Does The Red Rain Splash You by Stefan Fiedorowicz. The evolutionary racist Adolf Hitler wrote in his work Mein Kampf: "The stronger must dominate and not blend with the weaker, thus sacrificing his own greatness. Only the born weakling can view this as cruel, but he, after all, is only a weak and limited man; for if this law did not prevail, any conceivable higher development (Hoherentwicklung) of organic living beings would be unthinkable."[1] See: Question evolution! campaign and 15 questions for evolutionists and Evolution

Evolutionism is not based on evidence and logic, but decided on a "gut feeling".[6] Consequently, using a grassroots approach like the Question evolution! campaign and its 15 questions for evolutionists, it should be an easier ideology to crush like a tin can than most false ideologies.

Evolutionist claims creationists are buying up and hiding transitional fossils.[7][8]

Evolutionists, where are the countless millions of "missing" transitional fossils? [9][10][11]