From Conservapedia
This is the current revision of Temple Mount as edited by PeterKa (Talk | contribs) at 14:16, January 15, 2022. This URL is a permanent link to this version of this page.
Revision as of 14:16, January 15, 2022 by PeterKa (Talk | contribs)
(diff) ← Older revision | Latest revision (diff) | Newer revision → (diff)
Jump to: navigation, search
The Temple Mount, biblical Mount Moriah, is a hill in the Old City of Jerusalem. It is the site of a temple where the ancient Israelites kept the Ark of the Covenant. King Solomon built the first temple at this site in 957 BC on a threshing floor purchased by his father David.[1] Solomon's temple was destroyed by King Nebuchadrezzar II of Babylonia in 587/586 BC.[2] It was rebuilt by Zerubbabel under King Cyrus of Persia in 515 BC[3] and by King Herod of Judea in the first century BC.

When Jesus went to temple in the first century AD, he angrily overturned the tables of the money changers. The Roman commander Titus destroyed the temple in 70 AD during a Jewish revolt against Roman rule. Roman Emperor Hadrian built a Temple to Jupiter around 135. This temple was destroyed by Emperor Constantine in 325.

The Jewish historian Josephus records that Herod rebuilt the temple at great expense:

The Herodian temple took forty-six years to build.[5] In the time of Jesus, Antonia was a Roman fortress. Like the temple, it was destroyed in 70 AD.

The Church of the Condemnation, the traditional site of Antonia, is just north of the Temple Mount. That is to say, the location was selected without taking into account that Antonia was later incorporated into the Temple Mount.

In contrast to the Josephus, the Mishna gives dimensions of 500 cubits by 500 cubits (861 by 861 ft., 262.50 by 262.5 m).[8] The Mishna's description is suspiciously similar to Ezekiel's ideal temple and was written well after the Herodian temple no longer existed.[9] So it is less likely to be based on observation than is Josephus's.

Location of the temple

In Jewish tradition, the rock is the "foundation stone." It is connected to creation,[12] the binding of Isaac,[13] and to various other things.[14] In Isaiah and Psalms, the foundation stone is a metaphor for God's covenant with Israel.[15]

The Bordeaux Pilgrim visited Jerusalem around 333. This was soon after Constantine destroyed the Temple of Jupiter that Hadrian built. The pilgrim referred to the rock as a "pierced stone":

This scene suggests a verse in Zechariah where Jews weep over, "him whom they have pierced."[17]

After conquering Jerusalem, the Arabs built the Dome of the Rock in 691. The building is connected to the sanctuary in Jewish literature beginning with Pirke De-Rabbi Eliezer, written shortly after 833.[18] During the Crusader period, Al-Aqsa was called Solomon's Temple while the Dome was the Temple of God. 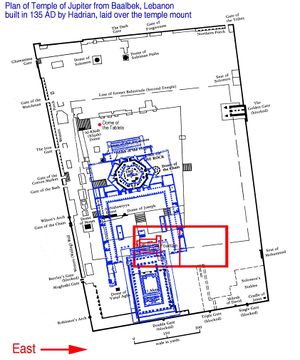 The black lines represent the current Temple Mount, blue is Hadrian's Temple to Jupiter in Baalbek, Lebanon, and red is a possible plan for the Herodian temple. Like the Temple to Jupiter in Jerusalem, the Baalbek temple was built by Hadrian. If the design of the Jerusalem temple was similar, the site of the octogonal Dome of the Rock corresponds to that of the hexagonal forecourt of Hadrian's temple. Drawing by Tuvia Sagiv.

Fortress Antonia, where Jesus was condemned by Pontius Pilate, overlooked the temple, according to Josephus. In modern times, the Dome is the high point of the Temple Mount. If Antonia was located at what is now the Dome, that would place the temple at al-Kas Fountain, according to Tel Aviv architect Tuvia Sagiv. This location is midway between the Dome and al-Aqsa. This area was landscaped and flattened by Hadrian. If the temple was at this site, it is now under 17 meters of earth.[10]

Writing in 400 AD, Jerome says that in his day an equestrian statue of Hadrian stood over the Holy of Holies.[19] Hadrian also built a Temple to Jupiter in Baalbek, Lebanon. The ruins of this temple still stand. If Hadrian's temple in Jerusalem followed a similar plan, this statute was at the site of the fountain.

West side of al-Aqsa

A trumpeting stone of the temple was found in 1968 near Robertson Arch near the southwest corner of Temple Mount. As the stone fell off the Western Wall in the first century, the discovery confirms that this wall, where today's Jews go to pray, was a part of the Herodian temple. If we follow the dimensions given by Josephus, the temple extended 1 furlong in both directions from the southwest corner. This would put the temple of the west side of al-Aqsa, according to Norma Robertson.

The Temple Mount was extended southward both by the Hasmoneans and by Herod. So the present southwestern area is unlikely to have been part of Solomon's Temple.[20] Based on digs just south of the southern wall, archaeologists believe that what is now al-Aqsa was the site of Herod's Royal Stoa. This was a government building along the south side of the Temple Mount that housed the bureaucracy and courts of the kingdom. Reused cedar timber from the Stoa was found in al-Aqsa.[21]

Dome of the Spirits

An alternative theory described by physicist Asher Kaufman is based on a saying in the Mishna that the temple was due west of the eastern gate. "One may not act irreverently or conduct himself flippantly opposite the eastern gate of the Temple Mount, which is aligned opposite the Holy of Holies," according to one mishna.[22] The current eastern gate, or Golden Gate, was built by Justinian in the sixth century. It was sealed off by Ottoman Sultan Suleiman the Magnificent in 1541. The sealing of the gate fulfills a prophesy by Ezekiel.[23] If the location of this gate corresponds to the Herodian gate, that would put the temple at the Dome of the Spirits (or Dome of the Tablets), which is 330 feet north of the Dome of the Rock. This site is sacred to the Sufi sect. The name "Dome of the Tablets" suggests that a tradition connected this site to the temple. But the dome was built in the tenth century, by which time the Golden Gate was standing at its current location.[10]

Several well-known episodes in the life of Jesus occurred at the Herodian temple. Mary brought Jesus to the temple forty days after he was was born.[24] He returned as a 12-year-old to debate the Pharisees.[25] During his ministry, Jesus visited the temple and was outrage by the sight marketers defiling it. He angrily overturned the tables of the money changers.[26] In the temptation narrative, the devil brought Jesus to the "pinnacle of the Temple" and challenged him to prove that he was son of the God by throwing himself off.[27]

This prophesy was fulfilled with the destruction of the Herodian temple by Titus in 70 AD.

After Jesus appeared at Pentecost, believers began to meet at the temple.[29]

There are various prophecies that deal with the temple. In a letter to a Christian community in Thessalonica. Paul prophesied that the temple would be rebuilt and presided over by a "man of lawlessness":

Paul wrote this letter in 51-52 AD when the Herodian temple was still standing. The man of lawlessness is identified with the anti-Christ of John's letters.[31] It is a construction parallel to "Son of Man," a phrase applied to Jesus in the gospels. There is a history of identifying this character with various political figures such as a Roman emperor, pope, or Napoleon. The Geneva Bible, used by the Puritans and by Shakespeare, identifies the anti-Christ with Pope Boniface VIII.[32]

According to Paul, the Old Testament prophecies concerning the rebuilding of the temple were fulfilled by the coming of Jesus:

"The God who made the world and everything in it, being Lord of heaven and earth, does not live in temples made by man," according to Acts.[34]

Revelation says that the messianic temple will be built in heaven, not on the Temple Mount:

Together with the grounds that surround it, the messianic temple prophesied by Ezekiel will be 51 miles by 21 miles.[36] The building itself will be about one mile square.[37] A mountain near Jerusalem, either Moriah (the Temple Mount) or Zion,[38] will grow miraculously to accommodate this huge building, according to Isaiah:

Non-Jews were excluded from the historical temples, but the messianic temple will be for people of all nations. It will be presided over by a messiah, which should be understood simply as a position that combines the roles of high priest and king.

According to the Koran:

This verse is conventionally interpreted to mean that Mohammad was miraculously transported to a "Further Mosque," in Arabic al-Masjid al-ʾAqṣā, as part of a one night journey in 621 and briefly ascended to heaven there. The phrase is properly understood as referring to the Temple Mount as a whole.[41] The al-Aqsa Mosque in Jerusalem is one of only three that are suggested as destinations for Islamic pilgrimage. The other two pilgrimage mosques are in Mecca and Medina.