The Annals of the World

The Annals of the World is the massive compendium of ancient history by James Ussher. The original Latin manuscript titled Annales veteris testamenti a prima mundi origine deducti (The Annals of the Old Testament, Deduced from the First Origin of the World), was published in two parts, in 1650 and 1654 respectively. An English translation was published in 1658,[1] after his death.

In 2003 Larry Pierce translated the original manuscript into English and published his translation, first in hardcover and subsequently in softcover. The Annals has also been bundled into a downloadable archive[2]

The Annals begins at a calculated date of creation and continues through to the destruction of the Temple of Jerusalem in 70 AD. Dates derived from it were included in the margins of many King James Version and other Bibles throughout the 18th, 19th, and 20th centuries.[3]

How to Cite This Resource

In Conservapedia, copy the block-quoted text exactly as it appears:

In print, copy and format as follows:

Note that numbered paragraphs, not pages, are the best parts to cite from the Annals. 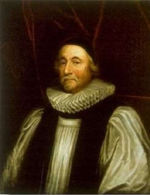 James Ussher (4 January 1581 – 21 March 1656) must surely rank with Herodotus, Thucydides, Plutarch, Suetonius, Tacitus, Cassius Dio, and Pliny the Elder and Younger as an historian. The Annals of the World, his magnum opus, is the result of a lifetime of travel, study, and research.

Ussher attempted to join the Bible to all other works of recorded history, and to present a unified treatment of the natural and political history of the world from Creation to 70 AD, the date of the destruction of the Temple of Jerusalem by the future Roman Emperor Titus. To do this, he relied heavily on ancient historical sources, and even traveled to the Mediterranean region to examine as many primary sources as he could. No one since (perhaps) Flavius Josephus had attempted to join Biblical and extra-Biblical history as Ussher did.

Most people remember Ussher for the chronology that bears his name—and with good reason, because Ussher determined to settle the chronology of the Bible before he attempted to unite other chronologies with it. He first had to decide which text of the Old Testament he would use—the Septuagint, the Samaritan Pentateuch, or the Masoretic Text. He chose the Masoretic after determining that it was as reliable as any ancient text could be, and was as close to an original as he could obtain.

After deciding on the text, he further relied on a number of internal clues in various parts of the Old Testament, including:

Further to this, he assumed:

Finally, he did not rely on any archaeological theories concerning the date of the Fall of Jerusalem. Instead, he back-calculated the age of the earth from the date of the death of Nebuchadnezzar II.

Ussher relied on extra-Biblical historical sources when they treated subjects that the Bible did not treat. The Bible was always his standard source, and every other source would have to yield to the Bible in his treatment.

The most important extra-Biblical sources he had were astronomical records. Astronomical dating is widely used for uniting the chronologies of two different civilizations. Of course, astronomical dates are only as reliable as are the records of the observations of astronomical events. Ussher understood this and thus relied heavily on historical mentions of total eclipses of the sun and moon, sightings of the planets, and so on. He also used astronomical dating to calculate that the birth of Christ was four years earlier than the traditional Julian reckoning—probably relying on the notes of the German astronomer Johannes Kepler.

Ussher used a number of other sources, including histories by Josephus and other ancient historians. Yet the most remarkable treatment by Ussher of any given source must be his treatment of Manetho, the Greek priest who made the first attempt at a chronology of ancient Egypt. Manetho assumed that the many "Dynasties" of Pharaohs ran consecutively. This implied that the First Dynasty of Egypt began earlier than the Great Flood—which Ussher knew to be impossible. Ussher solved the problem in a unique way: he truncated Manetho's chronology and simply discarded all Dynasties earlier than the Middle Kingdom as myths. But, relying on the records of Manetho that he kept, he assumed that two Pharaohs named Ramesses reigned for sixty-six years each, and that the first of these was the Pharaoh of the Exodus. It would be left to modern-day Christian Egyptologists to correct these errors.

Ussher also used Greek mythological sources, and actually assumed that many of the personages of classical mythology were real kings and queens—a debatable proposition at best. He used a number of other sources, chiefly for Assyrian history—and, sadly, a fire in Dublin, Ireland destroyed many of these sources. But many other sources survive, and those that do, concord with the Annals to a remarkable degree.

The Annals are, of necessity, a secondary source. Such a source is only as reliable as are its primaries. Given that, Ussher is in remarkable agreement—usually exactly or within one or two years—with most modern historians in their treatment of Babylonian, Medo-Persian, Greco-Macedonian, and Roman history. Indeed, Ussher places the destruction of the Temple by Nebuchadnezzar II of Babylon at 588 BC, very close to the 586 BC date that most modern archaeologists have assigned to this event.

He calculates the date of Creation as October 23, 4004 BC. This date derives from two key assumptions: that Abraham was born when his father Terah was 130 years of age rather than seventy, and that the Sojourn in Egypt began with the Abrahamic Covenant and not with the entry of Jacob into Egypt. Neither assumption is incontrovertible. The sharpest controversy, however, developed with Edwin R. Thiele's dissertation on the chronology of the Divided Kingdoms. This Biblical chronology dispute goes to the heart of any assessment of reliability, for it turns on whether one accepts Scripture as primary, or will allow secular evidence—sometimes of questionable reliability itself—to trump Scripture. A recent article published in "Bible and Spade" shows several places where Ussher’s chronology contradicts quite plain Scriptural texts at several places, as well as contradicting well-established secular dates, whereas the chronology of Edwin Thiele, especially as slightly modified by Leslie McFall and other later writers in the Thiele tradition, gives both a better agreement with specific Scriptural texts and with firmly established dates from the Ancient Near East.[10]

His arbitrary rejection of half of Manetho's king lists results from his repetition of Manetho's original error—assuming that the kings of Egypt, as listed, all ruled consecutively. Furthermore, he probably never realized that the ancient kings of Egypt routinely re-wrote the histories of their predecessors in a manner in which George Orwell would later predict that future governments would behave. The correction of the historical record of Egypt would be left to modern archaeologists.

That aside, his reckoning of the kings of the Divided Kingdom Kingdom has needed various corrections because of its conflict with the biblical text in a few places, as well as its conflict with well-established dates in Assyrian history such as the tribute of Menahem to Tiglath-Pileser III. For the latter synchronism, Edwin Thiele was much criticized because his chronology did not agree with the traditional date for the tribute, but the finding of the Iran Stela showed that Thiele’s chronology in this matter, as derived from the Bible, was correct, while Ussher’s chronology in this matter contradicts both the Bible and the Assyrian data.[11]

His calculations of the dates of the Crucifixion and Resurrection of Jesus Christ show the same exacting attention to detail that inform the rest of the Annals. Most importantly, Ussher laid a remarkably solid foundation for historical research, one that has held up remarkably well for nearly four centuries. If, therefore, the Annals suffers from reliability problems, then they result almost entirely with problems with the secular or "profane" sources that Ussher had available to him, and less often from a questionable interpretation of Scripture.

Moreover, many of his assumptions concerning ancient events have proved accurate, even though for centuries the Annals were the only Western extra-Biblical source attesting to them. These included:

The current edition of the Annals also includes eight valuable Appendices that lay a thorough foundation for Ussher's methods and calculations. These Appendices include a very thorough description of the Roman Republican and early Julian calendar (including full particulars on the placement of the Calends, Nones, and Ides in every month of each one), a discussion of Ussher's calculated time-line for the Northern and Southern Kingdoms, two different essays regarding the chronology of the Assyrian Empire, a set of ancient maps, a discussion of the Hebrew calendar and why its epoch begins so much later than Creation seems to, and finally, a discussion of why archaeology in general is less reliable than the Bible (because it has such a poor track record of sustaining any given conclusion from one decade to the next). Anyone attempting to settle any question of Ussher's chronological calculations must study these Appendices to see exactly how Ussher worked, and how he stayed as close to Scripture as has any man before or since.

The Annals of the World is one of the most comprehensive textbooks of ancient history available, although its chronology, particularly of the kingdom period, has needed modification to be in more exact agreement with specific biblical texts, texts that agree with confirmed secular dates from the Ancient Near East. It would make a valuable addition to any school or home-schooler's library, for its comprehensive treatment of ancient history alone. And even if Ussher's reckoning of the Exodus and other key dates in Judeo-Christian history are misplaced, this work is invaluable in showing how Ussher assigned those dates to begin with, and what assumptions he made.