From Conservapedia
This is the current revision of Thermidorian Reaction as edited by DavidB4-bot (Talk | contribs) at 02:21, November 2, 2019. This URL is a permanent link to this version of this page.
Revision as of 02:21, November 2, 2019 by DavidB4-bot (Talk | contribs)
(diff) ← Older revision | Latest revision (diff) | Newer revision → (diff)
Jump to: navigation, search

The Thermidorian Reaction was an event in revolutionary France, and is so named because it began in the month of Thermidor on the Revolutionary Calendar (July 19 - August 17) of the year II (1794). It was a reaction to the Reign of Terror after the execution of Maximilien de Robespierre. The original Thermidorians were made up of members of the two committees (The CPS and CGS), members of the moderate party and ex-terrorists. The moderates rose to take control, and as they had benefited greatly from the Revolution, they saw no need for the return of the Monarchy. They also disliked the Jacobins.

The Thermidorian Reaction was a response to the escalating bloodshed perpetrated by the Jacobin regime since the summer of 1793, in what is known as the "Reign of Terror." Directed especially by the Committee of Public Safety under Robespierre and Louis Antoine Saint-Just, the Terror had seen the suspension of many civil liberties, legitimized by the foreign coalition assembled to conquer revolutionary France and by internal rebellions in the south and in the Vendee. Arbitrary executions were common, and in some cases, especially in the anti-revolutionary and strongly Christian Vendee, a genocidal policy had been practiced to wipe out enemies of the Revolution.

Though most of the internal revolts had been suppressed by early 1794, the brutality of the Terror only accelerated, as Robespierre and his collaborators insisted enemies threatened the nation from every direction. The decree of 22 Prairial (June 10) announced that anyone denounced for anti-patriotic behavior could be brought before the Revolutionary Tribunal in Paris, which had the power only to acquit or to pass a death sentence. By July 1794, an average of 26 persons were being executed by the guillotine per day in Paris, more than three times the acquittal rate.[1]

By now, Robespierre's policies were beginning to alienate many of his fellow Jacobins, even some on the Committee of Public Safety and Committee of General Security themselves. Most of these members had had a hand in perpetrating the Terror, and were not generally motivated by moral concerns; however, as French armies scored triumph after triumph against their foreign opponents in the 1794 military campaigns, they did feel that the emergency used to justify the Terror had passed, and feared that Robespierre was using the sweeping powers granted to the two committees to establish a dictatorship. The Festival of the Supreme Being (June 8), a ceremony to celebrate Enlightenment virtue that in some respects resembled a pagan cult, which Robespierre had presided over, only reinforced these fears. They were also increasingly terrified that Robespierre might soon have them executed, as he had done with former allies such as Georges Danton.

By late July, a loose network of anti-Robespierre Jacobins had developed. Key members included Joseph Fouché, Jean-Marie Collot d'Herbois, and Jacques-Nicolas Billaud-Varenne, all of whom had been key functionaries in the Terror. 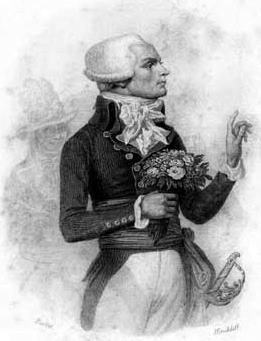 The coup that brought down Robespierre and his allies unfolded between 8-10 Thermidor (July 26–28), though the most critical events happened over the course of 9 Thermidor (July 27). It is also often referred to as "The Thermidor Coup," or simply "Thermidor."

Action on the part of the anti-Robespierre faction was precipitated by a speech Robespierre delivered to the National Convention on the 26th. In this two-hour speech, he alleged that a conspiracy had formed against the French Republic, saying its members had "plunged patriots into dungeons and carried terror into all ranks and conditions." Though he clearly implied there was a real and concrete threat to the revolutionary government, he refused to make specific charges against individual members. In the aftermath of the speech, Robespierre was pressed to explain exactly who he was accusing, and of what, but he refused.

Robespierre repeated his speech at the Jacobin Club that night, and Collot d'Herbois and Billaud-Varenne, who were present and were known to have had a falling out with Robespierre, were assaulted by other members of the club and driven from the building, with some crying, À la guillotine! (To the guillotine!) Later that night, Billaud-Varenne and Lazare Carnot, another CPS member and opponent of Robespierre's, saw Saint-Just working on a speech of his own in the Committee offices. It was typical for Robespierre to make abstract declarations of principle and of need for action, and for Saint-Just to make specific denunciations based on those statements. Billaud and Carnot therefore concluded Saint-Just would identify members of Robespierre's alleged conspiracy in the Convention the next day, and they and their associates quickly made plans overnight to strike first.

When the Convention met around 11:00 a.m. on the 27th, Saint-Just proceeded to deliver his speech. At a prearranged moment, however, he was interrupted by one of the opposition members, Jean-Lambert Tallien, who charged that he and Robespierre were speaking for themselves, not on behalf of the Committee, while Billaud-Varenne added that Robespierre's claims the previous day had been a threat against the Convention itself. Saint-Just, usually known for his eloquence and quick wit, seems to have shut down in the face of this unexpected counterattack, while Robespierre's attempts to regain control of the debate were shouted down. After cries of "Down with the tyrant! Arrest him!" and "The blood of Danton chokes him!" the Convention voted to arrest Robespierre, along with Saint-Just and three other Convention deputies—Georges Auguste Couthon, also on the Committee; Augustin Robespierre, Maximilien's younger brother; and Philippe-François-Joseph Le Bas—and François Hanriot, commandant of the National Guard and known to be loyal to Robespierre.

The arrested deputies were taken to the Committee of General Security and interrogated, then escorted to separate prisons. Word of the Convention's actions had spread through the city by now, however, and the Paris Commune, still led by extremist Jacobins, sent instructions to the prison officials not to accept them upon arrival. After this, at some point in the early evening, the deputies were freed and took refuge in the Hôtel de Ville, while the various urban sections were mobilized to provide a small army that would march on and suppress the Convention.

By nightfall, the Commune troops, led by Hanriot, had surrounded the Convention. However, the Commune's ability to mobilize the Parisian population on Robespierre's behalf had itself been weakened by the mass killings of the Terror, and many sections from the western half of the city were in fact sending troops to protect the Convention. Inside, the deputies declared Robespierre and the other arrested men outlaws, meaning they could be executed on mere verification of identity. Realizing he lacked the force to take the Convention, Hanriot and his army fell back to the Hôtel de Ville, but his troops were already becoming demoralized and deserting in the darkness, and by about 2:00 a.m. there was no longer anyone left to defend the building. The Convention forces, led by Paul Barras, broke into the Hôtel and arrested those inside.

Practically none of the arrested men were taken alive and intact. Couthon, who was crippled and required a wheelchair, had fallen down a staircase and had broken several limbs. Hanriot and Augustin Robespierre had attempted to flee out an upper window, but either fell or jumped; Augustin landed near the front entrance, while Hanriot fell into an open sewer and lay there several hours before he was discovered. Inside the hall of the General Council, Le Bas had shot himself, and Robespierre had attempted to do the same, but owing to his inexperience with firearms and/or his own nervousness, the gun misfired and shattered his jaw, leaving him alive but, like the others, in excruciating pain. Only Saint-Just declined to flee or attempt suicide, merely rising to greet the Convention troops.

The prisoners were taken to the Conciergerie prison, while a hastily summoned meeting of the Revolutionary Tribunal sentenced all the survivors and twelve others to death. Late on the afternoon of the 28th, the condemned were escorted to the Place de la Révolution and guillotined. According to historian Simon Schama, the scene "was particularly gruesome, like some mad exorcism of horror." Saint-Just went to his death quietly and with dignity, but the other leading Jacobins died in agony, with Couthon and Hanriot having to be strapped to a plank and pushed underneath the blade. Robespierre's jaw had been bandaged that morning, but the executioner tore it away at the last moment, producing painful screams from Robespierre before the blade silenced him.

On July 29 and 30 (11 and 12 Thermidor), another eighty-three Jacobins, mostly members of the Paris Commune, who were associated with Robespierre were executed. Others were imprisoned, including Jacques-Louis David, the famed revolutionary painter, while many who were already in prison on charges associated with the Terror were released. In the midst of the coup, the Convention had ordered a halt to the executions (apart from its own purge of the Robespierre faction), with the final victims of the Terror being guillotined during the night of July 27–28.

As the Terror was brought to an end, the new leadership within the Convention sought to pin responsibility for it on a few individuals, Robespierre in particular but also those who had directly aided in its operations. The prosecutor for the Revolutionary Tribunal, Antoine Quentin Fouquier-Tinville, who had zealously orchestrated the execution of entire families during the Terror, was especially singled out; he was arrested in August 1794 and, despite defending himself as a loyal public servant who had merely obeyed his orders (a forerunner of the defense many Nazi members would use at the Nuremberg Trials), was condemned and guillotined in May 1795.

Between July 1794 and 31 May 1795 the Convention went about demolishing the machinery of the Terror. This included the abolition of the Revolutionary Tribunal, the release of all suspects from prison and the closing of the Jacobin Club. The role of the CPS and CGS was taken over by committees of the Convention to limit their power. To deal with religious issues, the Convention renounced the Constitutional Church and enforced the separation of Church and State by deciding to no longer pay clerical salaries. Freedom of worship for all religions was restored on 21 February 1795, thus formally ending the policy of de-Christianisation. France was the first major European country to declare itself entirely neutral in all matters of religion.

The Constitution of the Year III, 1795

The main features of the new constitution were:

Weaknesses in the new Constitution