Difference between revisions of "Thomas Edison"

Thomas Alva Edison was one of the greatest inventors in history. Some of his best known inventions are the light bulb, the mimeograph and phonograph. His most important invention was the central power station that provided electricity to multiple users, and became the foundation of his company, now known as General Electric. He patented over 1,000 inventions in his lifetime. Thomas Alva Edison was born on Feb 11, 1847 in Milan, Ohio. His parents, Samuel Ogden Edison, Jr. and Nancy Matthews Elliott, had seven children, Thomas was the youngest. Three of his siblings died in childhood.[1]

In 1854, his family moved to Port Huron, Michigan, where the family remained while Thomas was growing up.

Edison's mother, Nancy, was born in New York and raised in New England. Her family were Presbyterians, her father was a minister in their church and deeply religious man. They stressed the importance of education to young Nancy, who went on to earn a teaching degree.

At the age of 7 years, Edison was sent to the local public school, a one-room schoolhouse with 38 other students. Edison had some congenital hearing loss which became worse after a bout of scarlet fever, which hindered his being able to hear the teacher in the noisy classroom. The teacher became irritated by Edison's constant curiosity and questions, and annoyed by his not following directions due to his inability to hear them, and insisted he was incapable of learning.

Edison's mother did not accept the teacher's evaluation of her son, and after he had spent 3 months in the school, chose to remove him from public school and educate him at home.

She taught him to read from the Bible, and his father encouraged him to read classical works. Edison was an avid reader and regularly frequented his local library. He took an interest in poetry, especially the works of Shakespeare and excelled in world history and English. Around the age of 12 he became exceedingly interested in Science and Chemistry, especially the works of Isaac Newton. When he began to ask complex questions about Physics and Science concepts his parents decided to hire a tutor for him.

Edison was also an entrepreneur, and as a child made spending money by selling newspapers, candy, and fresh produce. As a teenager, in 1860, he decided to publish his own newspaper, "The Weekly Herald" which made a profit it's first edition and each one thereafter, and focused on political news and the United States Presidential debates between Abraham Lincoln and Senator Stephen A. Douglas. Edison agreed with Lincoln's stance on emancipation, and volunteered to work for his campaign office, distributing campaign literature on his behalf.

Thomas was used to taking the initiative to learn on his own, and had a very inquisitive nature, a strong desire to learn, an excellent memory, and the ability to understand complex concepts. He considered his hearing loss to work in his favor, as he was not distracted by outside noises and able to concentrate on his own thoughts. His hearing loss increased over time, and in later years he lost all hearing in his left ear and about 80% of the hearing in his right ear.

At 15 years of age, Edison learned M7orse code and was hired as a telegraph operator. in several telegraph offices, then took a job with the Western Union Company in Boston. He chose to move far from home as he felt Boston had a strong scientific community. He was known as a hard worker and routinely worked 12 hour days, 6 days a week. In the evenings after work, he developed his own inventions.

He obtained his first patent on his first "real" invention, an automatic vote-recording machine. However, as with many inventors first attempts, it was not well received and turned out to be unmarketable. This was not because it did not work; it worked well, it was because the market was not receptive to the invention. While in Boston, Edison attended several lectures at Boston Tech (MIT); in 1869 he relocated to New York City.

Due to his exceptional mechanical ability and knowledge he was able to find work as a repairman of automated devices for a financial firm. After hours, he continued to thinker and experiment with mechanical devices. He had some success and was able to sell some of his inventions. The most important and profitable was a stock ticker he named the "Universal Stock Printer", which he sold for $40,000.

With the profits he established a laboratory in Newark, New Jersey, where he continued to develop his inventions. In his experiments, he always took a "hands-on" approach, and took nothing for granted, insisting on performing tests himself to compare his outcomes with previously recorded results.

He met and married Mary Stilwell, [2] and they had three children, Marion Estelle, Thomas Alva Jr, and William. (Later after Mary's death in 1884, he remarried. He wed his 2nd wife Mina Miller in 1886, they had 3 children, Madelene, Charles and Theodore, and remained together until his death). 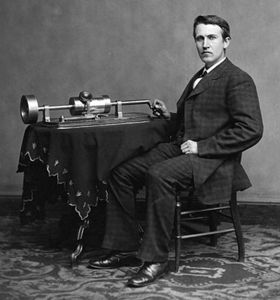 Edison and his phonograph

In 1876 Edison left his Newark lab and established a laboratory in Menlo Park, New Jersey, where he earned the nickname "The Wizard of Menlo Park". The following year, in 1877, he invented the first phonograph. The tin foil phonograph was the first machine that could record and reproduce sound. This invention brought him worldwide recognition and acclaim and he was invited to meet U.S. President Rutherford B. Hayes in the White House.

In 1879, Edison developed the first working incandescent electric light bulb. The original idea for the light bulb had already been proposed, and different versions attempted, but no one had yet been able to develop an electric lighting system that was practical and economical enough for common use. By 1882 Edison had established the first commercial power station, and began providing light and power to customers. from his revolutionary plant on Pearl Street in New York City; it was the first central electric light and power plant in the world. He also built and operated an experimental electric railroad and produced a superior storage battery of iron and nickel with an alkaline electrolyte.

In 1887 Edison moved his vast organization to West Orange, N.J., and thereafter devoted most of his time to its management. Along with a team of engineers he personally helped invent the first motion pictures. He concurrently worked on developing, then improving the phonograph, and recording equipment. In 1891 Edison patented the kinetoscope and the vitascope; having purchased the patent for a projector invented by Thomas Armat, he made the first commercial showing of motion pictures, at in New York City, on April 23, 1896. In 1913 he demonstrated the synchronization of moving pictures and sound, laying the foundation for the talking motion picture 1889 phonograph; battery is on left

In 1878-81 Edison was at the peak of his intellectual powers. He sought solutions to technological problems through scientific investigations, experimented with multiple ways of technical problem solving, calculated costs and pricing, established methods of production, evaluated the character of potential business partners, negotiated contracts and business partnerships one day and raved back to the lab to scrutinize technical details the next. Model of Pearl Street generating plant
Edison's development of central-station lighting systems for cities was one of the great achievements in world history because it brought electricity out of the laboratory into actual commercial use. His Pearl Street (New York City) electricity generating station introduced four key elements of a modern electric utility system: reliable central generation, efficient distribution, a successful end use (in 1882, the light bulb), and a competitive price. It was a model of efficiency for its time. At first it served 59 customers for about 24 cents per kilowatt hour. By the late 1880s, power demand for electric motors (especially for elevators and streetcars) brought the industry from mainly nighttime lighting to 24-hour service and dramatically raised electricity demand for transportation and industry needs. By the end of the 1880s, small central stations dotted many U.S. cities; each was limited to a few blocks area because of transmission inefficiencies of direct current (DC). Edison fought a mighty battle with George Westinghouse, who developed a competing system based on alternating current (AC).

In the early 1880s Edison made the transition from entrepreneurial inventor to mass manufacturer and business entrepreneur.

Leaving the laboratory to demonstrate his electric lighting system in a “real world” context, Edison establish his system in Britain and in Europe. He delegated much of the work to his most trusted assistants and hired talented new associates. Edison steadily improved his business acumen, the court system (where many patent suits were decided), the media, and his judgment of people's character. As always he relied on his intuitive ability to solve technological problems one step at a time.

He moved various Edison factories to Schenectady, New York, and consolidated as the Edison General Electric Company; the new corporation manufactured many kinds of electrical equipment from lamps to electric streetcars and locomotives, making a leading industrial center. In 1892 Edison's company and the Thomson-Houston Company combined to form the General Electric Company, GE, which soon became (and still is) of the world's largest industrial companies. Key members of Edison's team included Charles Batchelor, who supervised the construction of a highly visible exhibit at the Paris Exposition as well as several commercial installations on the Continent. Francis Upton, a university trained mathematician, managed the lamp production factory, where continuous improvement was required, first in Menlo Park and then the larger operation in Harrison, New Jersey. Francis Jehl, who began as a young lab assistant, first worked on the development of the electric meter and then oversaw the installation of Edison’s lighting system in Brunn, Austria, and started a lamp factory in the same town, all by the age of twenty-three. Samuel Insull was just twenty when he joined Edison in 1881 as private secretary and within the two years became Edison’s personal financial manager, a trusted advisor, and an officer of various Edison companies. With the outbreak of World War I, Edison concentrated his laboratory on military projects, finding substitutes for drugs, dyes, and chemicals that had previously been imported from Germany. He developed a process for making synthetic carbolic acid, coal-tar products necessary for the manufacture of explosives, and many safety devices. He also served as head of the Navy Consulting Board. After the war Edison was awarded the Congressional Medal of Honor.

Edison gained worldwide acclaim for his inventions. He continued working even with advancing age and in frail health, amassing a total of 1093 patents, more than any other inventor at that time. His last patent was obtained at age 83. He died at age 84, Oct 18th, 1931 in New Jersey. Three days later on the night of October 21, as a national tribute proclaimed by President Herbert Hoover, millions of Americans turned out their lights to plunge the country into momentary darkness. His inventions live on in everyday use by millions of people worldwide. When someone called him a genius, Edison made the famous reply, "Genius is 1 percent inspiration and 99 percent perspiration."

Late in life Thomas Edison was heavily influenced by Thomas Paine's Age of Reason, but despite attempts to describe him as an atheist he remained a believer in God and rejected claims to the contrary.

Little is known about the religious beliefs of the young Thomas Edison, when he was most productive. Sound movies: 1913 Edison's Kinetophone. The viewer looks at film through the peep-hole while listening to the accompanying phonograph through two rubber ear tubes. The 1895 version worked poorly; this one was dropped because labor contracts required a union operator to be present.[4]
Retrieved from "https://www.conservapedia.com/index.php?title=Thomas_Edison&oldid=591979"
Categories: