From Conservapedia
This is the current revision of Trump Derangement Syndrome as edited by SteKelBry (Talk | contribs) at 23:04, April 2, 2021. This URL is a permanent link to this version of this page.
Revision as of 23:04, April 2, 2021 by SteKelBry (Talk | contribs)
(diff) ← Older revision | Latest revision (diff) | Newer revision → (diff)
Jump to: navigation, search 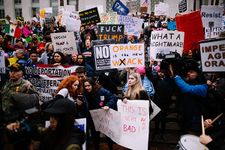 Anti-Trump protest in February 2017 – "Not My Presidents' Day" Aftermath of anti-Trump protests in Washington D.C. on Inauguration Day 2017

Trump Derangement Syndrome is the term used to describe the irrational despair, hysteria, and hatred liberals, establishment token conservatives, and the mainstream media[1] have for U.S. President Donald Trump and anything related to him.[2] It is a form of mental illness and mental declination.