Independence Day is the celebration of the birthday of the United States of America, referred to in secularized language as July 4 or the Fourth of July. On July 4, 1776, the Continental Congress formally adopted the Declaration of Independence; thus, breaking ties with the Kingdom of Great Britain, and a new nation was born.[1] The document, primarily written by Thomas Jefferson, served as a formal announcement that the 13 American colonies were no longer part of the British Empire and would henceforth be free and independent states.[2]

Independence Day has long been the most important of all American anniversaries, and its very first celebration was held in the nation's capital, then Philadelphia. Congress established Independence Day as a holiday in 1870,[3] and as a legal holiday in 1941. This is year number 245 of our Independence.

In the United States it is an official Federal holiday, celebrated on July 4.[4]

Most American businesses are closed and the citizens enjoy the summer holiday with cookouts, get-togethers, concerts, baseball, picnics, barbecues, bonfires, parades, and at night time enjoy displays of fireworks. Some people hold re-enactments of Revolutionary War era and some people give political speeches at events across the nations cities and towns.

The Flag and symbols of it are in evidence everywhere, in this annual outpouring of patriotism. An expression of pride and hope can be found in many patriotic songs such as the national anthem The Star-Spangled Banner, America the Beautiful, God Bless America, My Country, 'Tis of Thee and The Stars and Stripes Forever.[5]

John Adams wrote to his wife Abigail on July 3, it reads:[6]

In 1776, in Philadelphia, Pennsylvania, the Continental Congress adopts the Declaration of Independence, which proclaims the independence of the United States of America from Great Britain and its king. [7]

Before the Civil War free blacks found fault with the Declaration of Independence for inconsistency and the closely related grounds of hypocrisy and ineffectuality. They held negative attitudes toward Thomas Jefferson and dismissed the Fourth of July because it did not include freedom for blacks. Black leaders and white abolitionists fought to insure that the Declaration would remain an inescapable commitment.[8] 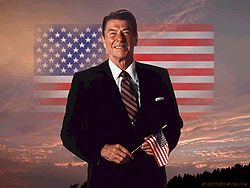 Symbols of Liberty in the United States