Hi, my name is Ed Poor and I'm a former developer, admin & bureaucrat from Wikipedia.

I know quite a bit about the internal workings of Wikipedia: the database structure, formatting, templates, dispute procedures, content and style guidelines; and, oh, yes, all the politics and gossip of the first few years.

Dpbsmith asked me to come over, so here I am. I'm finding the environment much more congenial.

My chief aim here is to facilitate the highest standards of encyclopedia development.

I was one of the earliest members of the Wikipedia project (UserID #188). I helped institute the following practices or software features there: 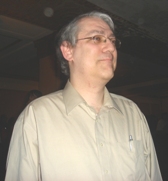 Pages I'm proud of there:

This is a partial list. Don't get all bent out of shape because I haven't placed your name here (yet). :-) And it's not in any particular order.

To my surprise and pleasure, I was voted in as a sysop here - reportedly it was unanimous. Thank you for your support.

I believe that users who are here to contribute should get a helping hand, and those who cannot or will not make useful contributions should be shown to the door. But since, "His mercy is forever sure", I don't like applying infinite bans; it's always possible for a person to make up his mind to take a new direction. (I'm currently chewing some tough pills supplied by User:TK, so watch out.)

I've unprotected a handful of pages and am watching them. I have hopes that eventually all content pages can be freely edited, once they reach a mature and stable state.

I hope this is the right way to respond to you

Ed, I was a Wiki-newbie when I got the boot, so I'm still fairly new to this whole process. I noticed your words of encouragement regarding Intelligent Design and I wanted to drop a quick reply. I hope I'm not vandalizing your page and I hope this is the proper way to reply to someone. I'm not an Intelligent Design expert. I am an editor and a nationally published writer. My comments at the Wikipedia ID page were primarily to point out logical/grammatical/fairness issues. I'm happy to help edit and I think the creation of this site is important for our children. If you need a minion to do some editing let me know. Everwill 07:22, 31 March 2007 (EDT)

Many are the volunteers clamoring to become one of my teeming minions. ;-)

I have a proposal to open a science classroom. The idea is to have experts in science (and I mean standard, practical science) answer basic science questions. It would not be a place for ideologues to leave their views or smear others. It would not be a place for non-mainstream science, e.g. creationism...as it is still not considered mainstream, it needs its own classroom. For example, someone could ask how scienice explains "x", and someone could give the standard answer. If anyone is interested in collaborating, especially wikigeeks who would have an idea how to set it up, let me know.--PalMDtalk 12:35, 31 March 2007 (EDT)

Don't say you fear it but something like this: Please include this information; or, According to (blank) McCarthy did (this action) which had (that result). We're not afraid of ideas here. It's not like some children's school library that censors Uncle Tom's Cabin or Huckleberry Finn because it might have a scary or offense passage. But like a library, there's a certain standard of decorum. --Ed Poor 16:02, 31 March 2007 (EDT)

If fear is not a factor, it's certainly odd that I get so very few answers to simple and direct questions. It's also odd that so much of what I posted to the McCarthy article, all of which was cited and factual, was removed. --PF Fox 18:37, 31 March 2007 (EDT)

Without having looked at the edits... and without knowing your opinions of McCarthy... let me say that it is perfectly possible for things to be "cited and factual," yet tendentious. A good example would be the initial version of the article on Brown University. Take a look at it: it is completely factual and almost completely cited (and a citation for the "slavery" section is easily found). I say this because whenever someone says "everything I added was cited and factual," it always raised a bit of a red flag in my mind. Now let me go look at those edits... Dpbsmith 13:50, 1 April 2007 (EDT) OK, I see your point. Dpbsmith 13:55, 1 April 2007 (EDT)

Thanks for the suggestion. I wasn't attacking him, I was genuinely amused by the fact that that was not immediately reverted, and especially with an edit summary like it was given. Liπus the Turbogeek(contact me) 10:28, 1 April 2007 (EDT)

I just resize image to less than 150kb, then try use random combination of letters as filenames, such as 56335.jpg or uuy587.jpg, usully works in less than 4 tries. Actully, this problem should be fixed on the server side, instead of requiring users to use stupid hacks. Jaques 14:01, 2 April 2007 (EDT)