War crimes consist of such ethical breaches as murdering unarmed noncombatants, executing or torturing prisoners of war. Some analysts evaluate the ethical standards of countries by the degree to which they tolerate war crimes in their own armed forces.

The New York Times was in Bucha, Ukraine on April 2, 2022 and did not report a massacre. Instead, the Times confirmed the Russian withdrawal was completed two days after the mayor of Bucha said it was, and that the Russians left “behind them dead soldiers and burned vehicles, according to witnesses, Ukrainian officials, satellite images and military analysts.” The Times said reporters found the bodies of six civilians. “It was unclear under what circumstances they had died, but the discarded packaging of a Russian military ration was lying beside one man who had been shot in the head,” the paper said. In Bucha, the Times was close to the neo-Nazi Azov Battalion, whose soldiers appear in the newspaper’s photographs. The Times suggests that Azov Nazis may be responsible for the killings: 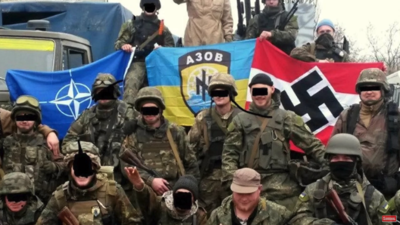 NATO-backed neo-Nazis in the Donbas war.[1]