Difference between revisions of "Weather Underground" 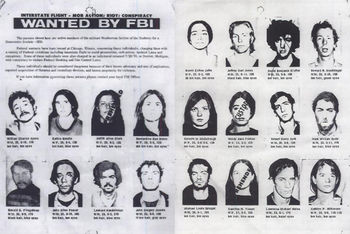 Not to be confused with a similarly named organization which tracks major storms.

The Weather Underground Organization (WUO), or Weathermen is a leftist terrorist organization now possibly inactive.[1] Since its inception the Weather Underground identified its fundamental strategic thesis with the Maoist Chinese. In its initial ideological statement, You Don't Need a Weatherman to Know Which Way the Wind Blows, the objective of wealth redistribution was put forward to justify revolutionary violence: