Difference between revisions of "Whale" 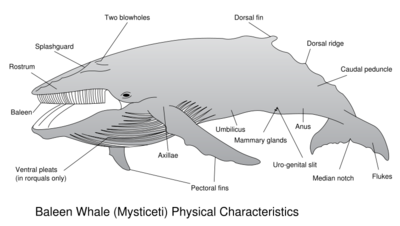 Whales are marine mammals of the order the Cetacea.

Living whales are separated into the toothed whales (which includes dolphins, porpoises, narwhals, beaked whales and sperm whales) and the whalebone whales; those (mostly very large) cetaceans which have teeth replaced by baleen (whalebone) to filter small prey from the water, which are what people generally think of when the word whale is used. The whalebone whales include the rorquals - the blue whale, fin whale, sei whale, Bryde's whale, minke whale, grey whale; the humpback whale; and the various right whales.

Although whales are famed for the massive size reached by some species, such as the blue whale (the largest animal to ever live), others are relatively small like the pygmy right whale which grows to about 20 feet [1]. Though whales have many traits in common with fish (including fins and tails) they are classified as mammals under the Linnaean taxonomy classification system because they breath air and lactate. Whales have a number of remarkable features including:

The question of how whales and their relatives could have evolved from terrestrial mammals has taxed evolutionary biologists since Darwin's suggestion that they may have evolved from ancient bears. In more recent times molecular and fossil evidence has been used to suggest that modern whales and their relatives arose from ancient artiodactyls (even-toed ungulates) with the closest living relative of all whales being hippopotami.[2] This kinship has been termed the whippo hypothesis. Evolutionary biologists estimate the last ancestor of whales and hippos lived about 25 million years ago,[3] which contrasts with the young earth creationist position that whales were created about 6000 years ago when God created the earth.[4][5][6]

Whales in the Bible

The great fish that swallowed Jonah,

Now the LORD had prepared a great fish to swallow up Jonah. And Jonah was in the belly of the fish three days and three nights. Jonah 1:17

is often thought of as being a whale, although the actual creature is unknown and may have been something unknown to science, having been specially prepared by God.