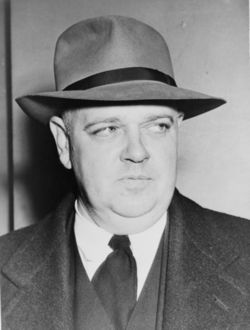 Whittaker Chambers (born Jay Vivian Chambers, April 1, 1901 – July 9, 1961) was an American intellectual, editor of Communist publications, foreign editor of Time magazine, Soviet spy, and the most famous American witness against Communism. He is best known for his accusation and testimony against a senior American diplomat Alger Hiss charging him in 1948 with being a Soviet spy. The spectacular case dominated politics in the late 1940s, leading to Hiss's conviction, and the rise of Richard Nixon, and the virulent hatred on the left for Chambers for betraying their friends in the name of patriotism and Christianity. Chambers wrote for William Buckley's National Review. His Witness (1952) is one of the great autobiographies in American literature.

Chambers was born in Philadelphia, Pennsylvania and spent much of his youth in suburban Long Island, New York. He got along poorly with his father, an artist and illustrator; he was on better terms with his mother, a former actress, and his grandfather, a leading political journalist. He had a miserable childhood as a loner whose parents frequently separated. After graduating from high school in 1919, he bummed around the country, discovering an empathy with the under class. A brilliant student of language and culture, he displayed depth at Columbia University, where he was influenced by professors Mark Van Doren and of such friends as Meyer Schapiro, Louis Zukofsky, Clifton Fadiman, Langston Hughes, and Lionel Trilling. His poetry, drama, and stories convinced Columbia literary circles that he could become a major American writer—even a great poet. But Columbia expelled him in 1922—perhaps for a blasphemous play, or more likely for skipping class. No matter, he was a convert to Communism and the Party was now all that mattered.

In 1925, Chambers joined the American Communist Party and edited Communist periodicals, including The Daily Worker and The New Masses. Chambers joined the Communist underground in the spring of 1932. In 1933, he was sent to Moscow for intelligence training and when he returned to the United States, his main controller was Josef Peters. Peters, a veteran of the Bela Kuhn revolution,[1] introduced Chambers to Harold Ware, head of the Ware group, a Communist underground cell in Washington that included Alger Hiss, Henry Collins and Lee Pressman. Hiss, meanwhile, took a job on the legal staff of the Agricultural Adjustment Administration. Chambers worked in Washington as an organizer among Communists in the city and as a courier between New York and Washington for stolen documents which where delivered to GRU Illegal Rezident Boris Bykov. He worked in this capacity from 1934 until he left the Communist party in 1938 having been alienated by the Great Purge of Josef Stalin. Chambers tried to convince Hiss to leave the party also; the two sat up all night after dinner one night arguing the point. Chambers recounted how Hiss, tears streaming down his face, refused to break with the Party because of his loyalty to his friends. It was the fanaticism of Hiss's wife, Chambers believed, that kept him in the party.

Chambers saved a collection of documents he received from Hiss to protect himself and his family against retribution from the secret apparatus as occurred in the Juliet Poyntz case. Ten years later they became known as the "pumpkin papers."

After leaving the Communist party, Chambers' politics shifted right. In the late 1930s, Chambers joined the staff of Time Magazine, where he would eventually rise to the position of senior editor and earn a yearly salary of $30,000. While at Time, Chambers became known as a staunch anti-Communist, sometimes enraging his writers with the changes he made to their stories.

In late 1939, after the Soviet Union and Germany signed a non-aggression pact, Chambers approached assistant Secretary of State Adolf Berle and spent three hours detailing what he knew about Communist activity within the United States. In the wake of World War II, Chambers' story was mostly ignored.

Chambers translated Felix Salten's children's book, Bambi, in 1927 while editing at the Daily Worker. As recounted on page 239 of Witness, Chambers did so because wages on the Daily Worker were "intermittent and so small." He was asked to do the translation by Clifton Fadiman of Simon and Schuster, and the translation became an instant success, thus making Chambers an established translator. Chambers also wrote reviews of the early volumes of Arnold Toynbee's A Study of History.

Trial of the Century

After the war, Chambers' story caught the attention of a freshman Representative from California, Richard Nixon. On August 3, 1948, Chambers testified before the House Un-American Activities Committee and presented a list of what he said were members of an underground communist network working within the United States government in the 1930s and 1940s. One of the names on that list was that of a State Department official who had participated in the creation of the United Nations: Alger Hiss. The official White House response was to dismiss the case as a "red herring." Internally, White House staffers set about discrediting Chambers.

Chambers had skeptics. Hiss was well educated and had a long list of achievements to his name, and he vehemently denied the charges. Comparatively, Chambers was a drifter. Hiss had credibility; Chambers' story seemed fantastic, with little hard evidence. Hiss used this to his advantage, maligning Chambers in the press. Hiss even fabricated stories about Chambers having homosexual experiences, and used them to smear Chambers in public.

Hiss initially denied knowing Chambers, then later said he recognized Chambers as a man he had known as George Crosley. After Chambers accused Hiss of being a communist on the radio program "Meet the Press," Hiss filed a $75,000 libel suit. Then, in November 1948, Chambers led two HUAC investigators into a pumpkin patch in Maryland, where he brought out a hollowed-out pumpkin containing four rolls of microfilm. The contents of the microfilm became known as the "pumpkin papers." Nixon posed with a magnifying glass and these microfilms in a number of highly publicized photographs.

On May 31, 1949, amidst unprecedented hype, Alger Hiss's perjury trial began. After that trial ended in a hung jury, a second was held, which ended with a one count conviction of Hiss on January 21, 1950. By then, Chambers had made a total of 14 appearances. Because of his testimony, he resigned from his position at Time and, at one point during the trial, Chambers attempted suicide.

In the aftermath, the Hiss trial cast a shadow among a skeptical public upon the credibility of many Democrats, liberals, and even President Truman himself. Chambers relates how he was told, except for him, the whole political climate of the early Cold War would have been different.

Congressman Richard Nixon was so skeptical of his background, he asked FBI Director Hoover to do a thorough background check. Nixon feared Chambers was a homosexual and had been confined to a mental hospital. The FBI found gaps in Chambers life story for which Chambers could not account.

Personal financial pressures resulting from the legal battles Chambers endured at the hands of Hiss and the American Communist movement led Chambers to author his autobiography, "Witness". Since its release in 1952, it has been reviewed thusly:

"It is the first book any inquiring political mind should read, because it not only describes one of the most challenging confrontations in history, but also offers a cautionary tale for our current generation. "Witness" should be required reading in every public, private and religious school. It should be first on the list in every political science class.

While the Hiss trial propelled Nixon's political career, Chambers derived little benefit from it. His job at Time gone, Chambers went to work on his farm, writing his autobiography, Witness, which was published in 1952.

Critics of Chambers, then and now, maintain that his life was a paradox and he experienced so many changes of lifestyle and philosophy that his testimony was unreliable and self-serving.

Chambers died of a heart attack on July 9, 1961. A final book, titled Cold Friday, was published posthumously in 1964. It predicted, correctly, that the fall of communism would start in the satellite states surrounding the Soviet Union in Eastern Europe.

Whittaker Chambers life is the classic tale of redemption, when in 1984, more than twenty years after his death, President Ronald Reagan posthumously awarded him the Presidential Medal of Freedom, for his contribution to "the century's epic struggle between freedom and totalitarianism."

Members of the Karl group

"Karl" and "Carl" were cryptonyms used by Chambers in the mid-1930s as courier between the CPUSA secret apparatus and Soviet intelligence. It appears that after the mysterious death of the NKVD Illegal Rezident Valentin Markin in August 1934, within days the Karl group was transferred to the GRU Illegal Rezident Boris Bykov. Below is a partial list of members.