Below are resources related to the topics of atheism and slavery and atheism and forced labor (Forced labor - governments putting some of its citizens under slavelike conditions).

In atheistic communist regimes forced labor has often played a significant role in their economies and this practice continues to this day. (See: Atheism and forced labor)[1] [2][3]

In Myanmar a nontheistic form of Buddhism called the Theravada school of Buddhism is prevalent. According to the International Labor Organization (ILO), about 800,000 people are subject to forced labor in Myanmar.[4]

The inaugural Global Slavery Index is published by the Australia-based Walk Free Foundation,[10]

According to the Global Slavery index website: "The Global Slavery Index estimates that on any given day in 2016 there were over 3.8 million people living in conditions of modern slavery in China, a prevalence of 2.8 victims for every thousand people in the country. This estimate does not include figures on organ trafficking."[11] A portion of these individuals may be in forced labor conditions due to the Chinese, communist government having many political dissidents and a significant amount of religious persecution (see: Slavery and forced labor in modern China).

According to NBC News:

Desecularization in China is partly occurring due to its association with equality, individual freedom and democracy (see: Asian atheism).[13] See also: Growth of Christianity in China

North Korea practices state atheism and belief in God is actively discouraged.[14] Open Doors, an organization based in the United States, has put North Korea at the very top of its list of countries where Christians face significant persecution - for 12 years in a row.[15]

According to the Global Slavery Index website: "The newly released 2018 Global Slavery Index names North Korea and Eritrea as the two nations with the world’s highest rates of modern slavery, emphasizing how conflict and government repression contribute to the crime."[16] A portion of these individuals may be in forced labor conditions due to the North Korean, communist government having many political dissidents and a significant amount of religious persecution (see: Atheistic. communist regime of North Korea uses forced labor).

Slavery and the past of Thailand and Burma

Between the 1600s and early 20th century one-quarter to one-third of the population of some areas of Thailand and Burma were slaves.[19] Burma is present day Myanmar. 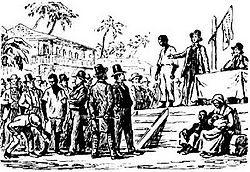 On February 20, 2012, the British newspaper the Daily Mail reported that Richard Dawkins' family fortune came from the slave trade".[20]

Richard Dawkins is one the founders of the New Atheism movement.

On February 20, 2012, the British newspaper the Daily Mail reported that Richard Dawkins' "family fortune came from the slave trade".[21] On February 19, 2012, The Daily Telegraph reported that Dawkins is being called to make reparations for his family's past.[22]

As far as the demand for Richard Dawkins to pay reparations, The Daily Telegraph reported: Christian apologetics and slavery in the Bible

See also: Slavery in the Bible

Christian apologists have written a number of work relating to slavery in the Bible some of which are cited below:

The YouTube channel Shockofgod maintains that: Christian principles advance freedom; human rights need to be grounded in theism and seen as God given and if man decides human rights then they can be taken away; Jesus Christ saves Christians from their sins; atheists are slaves to their sin and atheism puts people under spiritual bondage.[26]

Despite various atheistic populations having a significant amount of slavery in both the present and the past, atheists commonly engage in moral equivalence by decrying slavery in the Bible - particularly the Israelites owning slave and Christian slaveholders mentioned or alluded to in the New Testament.[27] Voltaire also had little problem with a slaving ship being named after him, despite mocking slave owners in Candide. In addition, various atheistic Enlightenment philosophers either supported slavery or otherwise failed to condemn it, many of whom are later falsely credited with helping to end slavery.[28]

And as noted above, historically conservative Christians, many of which also founded the Republican Party to fight Democrat-imposed slavery, have been at the forefront of abolionist endeavors. By this reckoning, this exposes the Democrats' post-1964 claims of the pre-1964 Republicans being "liberal" (not counting RINOs) and the pre-1964 Democrats being "conservative",[29] as well as their claims of being the "champions of civil rights" and their accusations of the Republicans being the "party of racism", as the historical revisionist lies they are.[30]