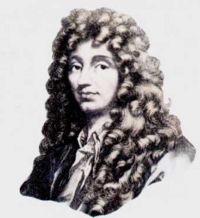 Christiaan Huygens (April 14, 1629 – July 8, 1695) was a Dutch mathematician and astronomer who invented the first working pendulum clock in 1656. The ticking of the clock was regulated as the pendulum swung. In 1675, Huygens designed a portable clock with a spiral spring and balance wheel to regulate the ticking.

He also made his own telescope lenses, which led to many great discoveries, including the true shape of the rings around Saturn. Later in life, Huygens studied light, dynamics and gases. He invented a manometer to calculate the "elastic" force of gases in 1661. In 1678, he proposed that light was made up of waves, not particles. Huygens also discovered the polarization of light (that light waves have the ability to vibrate in a pattern).