Essay: PZ Myers embarrasses himself at the Creation Museum 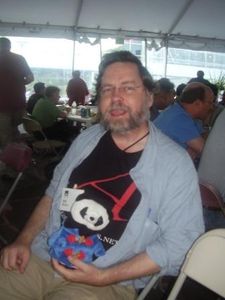 If PZ Myers were thinner and sprier, he would have needed no assistance! Evidently, the atheist and evolutionist community is quite aware that PZ Myers is fat and out of shape!

The creationist Ken Ham, who is a big believer in medical science and exercise science and is much thinner than PZ Myers, climbs up and down the triceratops at the Creation Museum all by himself!

On the other hand, PZ Myers' laborious ascent and descent of the triceratops at the Creation Museum did scientifically prove once and for all that modern pigs cannot fly!

Question: What is the difference between PZ Myers and a cephalopod?

Answer: Cephalopods are able to move fast. They are able to fly distances of up to 50 meters.

"My grandfather could climb that, and he's 70. Perhaps it's just because PZ doesn't work out and is a bit chubby. Maybe he just doesn't work out because he is so busy indoctrinating little children with that 'evolution' theory. Yes, that must be it." - SpeX7X, 2011 [2]

"From Conservapedia: "The creationist Ken Ham, who is a big believer in medical science and exercise science and is much thinner than PZ Myers, climbs up and down the triceratops at the Creation Museum all by himself!" LOL! Who says creationists don't have a sense of humor?" - Terry Morris, 2010[3]

"Nice PZ. You're making atheists look bad by ignoring the sign for 12 and under only and doing what you want to poke at an opposing view. Atheists are supposed to compromise their morality just to make a point. There's other ways to make a point." - MusicMonk84, 2009 [5]

Humorous question of the day

How does PZ Myers know its dinner time?

Answer: His wife yells out Sooie!

PZ Myers believes the Olympics unfairly discriminates against obese people. As a result, he has started the "Obese Olympics". Myers plans on representing America in the triceratops climbing event.

Since World War II a majority of the most prominent and vocal defenders of the evolutionary position which employs methodological naturalism have been atheists.[6]

PZ Myers evolves into a flying pig? The transitional animal the flying pig?

Please notice the large wing span which according to evolutionary scientists is said to have evolved over time in order to keep the flying pig aloft. Evolutionary "scientists" are not exactly sure what the flying pig looked like and the above animated picture is believed by evolutionists to be a close facsimile.

A 2009 picture of a significantly overweight PZ Myers can be found HERE. A 2010 picture taken in Australia shows PZ Myers drinking ale/beer and he had excess weight in his abdominal area.[9] In 2010, PZ Myers had health problems related to his heart.[10] In addition, medical science research indicates that excess weight impairs brain function.[11][12] Given PZ Myers' biological training and the wide dissemination of the health effects of being overweight in terms of cardiovascular health and brain function, it is unfortunate that preventative medicine was not used in greater measure in terms of his health.[13][14][15] PZ Myers' inattention to diligently implementing the recommendations of nutritional science, exercise science, and medical science is not entirely surprising given his vehement advocacy of evolutionary pseudoscience. There have been a number of notable evolutionists who have been overweight.

PZ Myers, supper is on the table! Sooie!

Vox Day had an individual complain about the notion that the atheist community has a problem with obesity (please see Atheism and obesity). As a result, on May 19, 2011, Vox Day released a blog post entitled Mailvox: now, who said atheists are fat? where 80% of the people taking a picture with PZ Myers were overweight and PZ Myers was overweight in the picture as well as can be seen HERE. The picture was originally posted on PZ Myer's blog Pharyngula by Myers on May 16, 2011 and an online argument quickly ensued concerning the appearance of the photograph's participants.[16] Please also see: Atheism and obesity Did PZ Myers' ascent and descent of the triceratops at the Creation Museum really prove that pigs cannot fly?

A picture of PZ Myers taken with the evolutionist Stephen Jay Gould.

The current scientific consensus is that before his recent weight loss PZ Myers ate more food per day than the ancient triceratops commonly did. That is one of the reasons why PZ Myers had some difficulty climbing up and down the triceratops at the Creation Museum. [17]