From Conservapedia
(Redirected from Eurozone)
Jump to: navigation, search 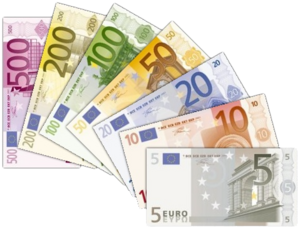 The euro (symbol €) is an abbreviation for the 28-member European Union and is also the common currency in its Eurozone (a population of more than 320 million). Five other states with formal agreements also use the euro currency, and four other nations have it without formal agreement. Use of the euro began in January 2002, and 12 nations switched their currency immediately to the euro. There was more than €610 billion in circulation in December 2006 (worth US$802 billion at the time), hence the euro had the highest value of cash in circulation in the world, then having surpassed the U.S. dollar.[1]

In January 1999 the exchange rates of countries that had passed the criteria (and were not exercising an opt-out) were fixed to the euro. The European Central Bank (ECB) came into being. Euro coins and notes were introduced to the general public on the 1st of January 2002 as legal tender, alongside national currencies. In March 1998, when the calculations in countries that had met the convergence criteria were finalized, eleven countries were admitted to join the European Monetary Union: Austria, Belgium, Finland, France, Germany, Ireland, Italy, Luxembourg, Netherlands, Portugal and Spain. In June 2000 Greece was admitted. Slovenia joined in 2007, and Malta and Cyprus joined in 2008. Since 2011 the Euro is the currency of Estonia. On January 1, 2014 the Euro was imported in Latvia. In 2015 Lithuania joined the Euro zone.

Countries within the European Union were able to join the Common Currency if they met four criteria (known as the 'convergence criteria'). These were:
1. The budget deficit must be below 3% of GDP (the difference between government receipts and expenditures.)
2. The total government debt must be below 60% of GDP.
3. The country must have an inflation rate within 1.5% of the lowest 3 inflation rates of EU countries.
4. Nominal Long-term interest rates must be within 2% of the interest rate of countries with the lowest 3 inflation rates.[2]


In addition to these criteria a member state's currency must fluctuate within the margins allowed. Countries were allowed to join the common currency if their budget deficit and total government debt were approaching the reference values at a 'satisfactory pace', but not actually on them.

In the United Kingdom the currency is still the pound, but before the Eurozone crisis there was pressure to convert to the Euro that is used throughout Europe. The UK and Denmark are the only European Union member states with an 'opt-out' (allowing them to select not to join the common currency despite meeting the criteria). In addition to the four criteria of entry set out in the Maastricht Treaty the Chancellor of the Exchequer laid out 5 economic tests the United Kingdom must meet to join; at the last report it had met one, with three others dependent on the final condition which had not been met. Many conservatives in the UK (Tories) resist conversion to the European currency because a reliance on a common currency represents a loss in sovereignty and control. In particular, there is fear that joining the synchronized EU policy may result in sub-optimal interest rates in difficult periods.[2] Initially the value of the euro fell on the exchange markets, while many expected it to do the opposite. However it has strengthened in the years since, partly due to the falling value of the dollar. The ECB is charged with maintaining the inflation rate in the Eurozone between 0 and 2%.

By the end of 2006, after about five years of the euro, a French magazine Le Pèlerin reported that 52% of the French feel that the euro is a "bad thing", blaming it for price hikes and job losses. 71% of French blue-collar workers said that euro has hurt them personally.[3]