From Conservapedia
(Redirected from Fire Fighting)
Jump to: navigation, search 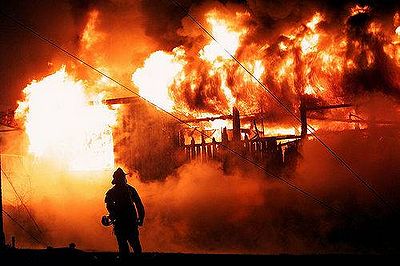 A fireman monitoring a late night fire at a mill.

When a fire is not posing a risk to spread or cause other catastrophic damage (such as igniting explosive material), sometimes firefighters allow fires to burn themselves out.

Firefighting is the attempt to minimise injury or loss of life, or damage to property, caused by a fire, either by extinguishing the fire or ensuring its containment.

Firefighters or firemen are those whose job it is to attempt to extinguish fires in a given area. Firefighters can either be paid (professional), or volunteer. In many rural areas and smaller communities, fire departments are volunteer, while in many large cities they are professional. In most places, firefighters also perform other emergency service work, including search and rescue, and emergency medical services. Many firefighters are also certified as EMTs (Emergency Medical Technicians) or paramedics.

Wildland firefighting is fighting forest fires, brush or bush fires, and fires in other undeveloped areas. The United States Forest Service and other government agencies which administer public lands hire a large number of wildland firefighters every summer, when fire conditions are at their peak.

Entry firefighting is a highly specialized form of firefighting involving the actual direct entry of firefighters into a fire with a very high level of heat. It is not the same thing as proximity firefighting, although it is used in many of the same situations (such as flammable liquid fires). Three elements necessary for a fire to burn: oxygen, fuel, and a source of heat. Remove any one of the three and the fire can no longer burn. (See Fire.) All firefighting tactics are based on removing one or more of the three elements in the fire triangle.

Fire fighting involves a range of methods and equipment for fighting fires, depending on the circumstances and availability.

Water: The standard method is to pour water onto the fire. This reduces the heat, hopefully to the point that the fire can no longer burn. However, water is not suitable for liquid fuel fires, because it is likely to spread the fuel and make the fire larger, nor for electrical fires, because of the risk of electric shock. In some cases, water is delivered as a fine mist (using a fog nozzle) to not only cool the area but also produce steam which dilutes the ambient oxygen.

Foam: Foam is put onto fires fueled by liquid fuel. It works by preventing oxygen getting to the fire, but does not spread the fuel around.

Powder: Powder is used on electrical fires, as it does not conduct electricity. Like foam, it works by cutting off the oxygen supply to the fire.

Gas: Non-combustible gases are sometimes used in fire-suppression systems installed in buildings. They work by being heavier than air, thus displacing the oxygen. However, because the oxygen is displaced from the building, humans are unable to survive for long either, so gas systems are only used in special circumstances.

Extinguishers: Fire extinguishers are canisters of water, foam, or powder which can be carried by one person to the fire. They are of limited capacity, but can be used to stop a fire before it becomes large. See the "Extinguishers" section below.

Vehicles: Various vehicles are used by fire fighters, including trucks which pump water from a nearby supply onto a fire, and tankers which carry water to the site of the fire when no local supply is available.

Fire breaks: For fires in forested areas, bulldozers or other heavy equipment may be used to cut a clear path through the forest in front of an advancing fire, or such fire breaks may be permanently maintained in forested areas. Fire breaks provide an area with little fuel content, for the purpose of the fire stopping when it reaches the break. However, strong winds might carry sparks from the fire across the fire break to further forest on the other side. Even so, it may slow down the fire enough for fire crews to cope with the rest.

Back-burning: Instead of constructing fire breaks, an area ahead of an advancing fire might be set alight and burnt in a controlled manner to remove the fuel from that area, thus impeding the advance of the main fire.

Aircraft: Both fixed-wing and rotary-wing aircraft (helicopters) are used to drop water onto fires, particularly in areas difficult to reach on the ground.

For small fires, a fire extinguisher can be used. Remember P.A.S.S. (Pull - Aim - Squeeze - Sweep). Fire extinguishers are rated for the types of fires they are effective against. Class A: ordinary flammable solids, such as wood and paper. Class B: flammable liquids, such as grease, oil, and gasoline. Class C: electrical fires. Class D: flammable metals.

The "fire truck" and "fire engine" are two different vehicles, and the terms should not be used interchangeably. In general, fire engines are outfitted to pump water at a fire. Trucks do not pump water and are outfitted with ladders and other equipment for use in ventilation of the building, rescue, and related activity. In many jurisdictions it is common to have a ladder (or truck) company and an engine company stationed together in the same firehouse, as was depicted in the movie Ladder 49.