From Conservapedia
(Redirected from Free Energy)
Jump to: navigation, search 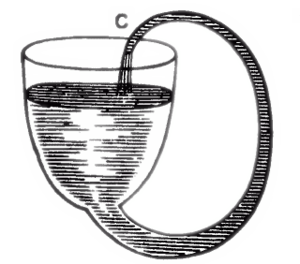 Robert Boyle's self-flowing flask appears to fill itself through siphon action. This is not possible in reality because a siphon requires its "output" to be lower than the "input".

A perpetual motion machine would try to use its initial energy to remain in motion perpetually. Because entropy is always increasing isolated systems, indefinite motion is impossible because an increase in the disorder of the system will inevitably disrupt the motion and require additional energy to "fix" it. The Second Law of Thermodynamics and Hebrews 1:10-11 predict that a perpetual motion machine is impossible, and none has ever been created.

An even less plausible type of perpetual motion machine would continue to perform work without any input of energy, thereby serving as an unlimited energy source. This is prohibited by the First Law of Thermodynamics, which states that energy must be conserved.

Since both types of perpetual motion machine are flawed in both theory and in practice, they are clearly pseudoscience. Despite this, websites have professed to offer "free energy" devices for sale.[1][2][3]