From Conservapedia
(Redirected from George V)
Jump to: navigation, search 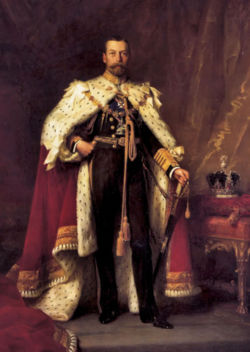 George V (George Frederick Ernest Albert Windsor, 1865-1936) was king (1910–36) of the United Kingdom of Great Britain and Ireland (United Kingdom of Great Britain and Northern Ireland after April 12, 1927), and the British Dominions beyond the Seas, and emperor of India. He succeeded his father, Edward VII, and was in turn succeeded by his eldest son, Edward VIII. Scandal-free, hard working and popular, George was the British monarch who, with Queen Mary, established the modern pattern of conduct for British royalty, based on middle-class values and virtues.

He was born at Marlborough House, London, on June 3, 1865, the second son of the Prince and Princess of Wales, later Edward VII and Queen Alexandra; he was christened George Frederick Ernest Albert. He was not well educated. He entered the navy and always appreciated its tough training, rising to the rank of commander by 1891 with command of a gunboat; his active naval career ended after a brief command of a cruiser with rank of captain In 1892, on the premature death of his dissolute elder brother Albert (1864–92), he became second in line to the throne after his father. Queen Victoria made him Duke of York and (July 1893) he married Princess Mary of Teck (1867–1953), who had been betrothed to his late brother. They had six children; the first son became King Edward VIII (1894–1972) and the second became King George VI (1895–1952). Home life was placid; George was a superb marksman and prominent stamp collector. After many difficult father-son relations in the history of the monarchy, Britain was delighted to see a fairly satisfactory relationship, although father and son feared each other; the royal family was relieved that the older brother, a homosexual, did not become king.

When his father became king in 1901 he inherited the dukedom of Cornwall and was created Prince of Wales. His main role was to visit the far-flung British empire. In the first great tour in imperial history, he and his wife went to Aden, Ceylon, and Singapore; opened the first Australian parliament in Melbourne on May 9, 1901, and visited Brisbane, Sydney, and New Zealand. They went to Mauritius and South Africa, then crossed Canada east to west and back again on the Canadian Pacific Railway, finally returning to London after showing the flag and assuring the locals that London cared for them. On reporting his trip he called out to insular Britons, "Wake up, England!", a slogan that became a hallmark of George's concern for the Empire and his bluff, commonsensical manner.

The Royal Tour of 1901 was designed by Colonial Secretary Joseph Chamberlain with the support of Prime Minister Lord Salisbury. Its primary goal was to reward Australia, New Zealand, Canada, and South Africa for their participation in the South African War of 1899–1902. At every stop George ceremoniously presenting thousands of specially designed South African War medals to colonial troops. In South Africa the royal party was greeted by elaborate decorations, expensive gifts, fireworks displays, and met with civic leaders, African leaders, and Boer prisoners. Despite this outward display, not all residents responded favorably to the tour. Many white Cape Afrikaners resented both the display and the expense, the events of the war having weakened their capacity to reconcile their Afrikaner-Dutch culture with their status as British subjects. Critics in the English-language press decried the enormous expenditures at a time when families faced severe hardship.[1] The visit made for New Zealand's first nationwide extravaganza. It allowed the people and the colony a chance to show off, to confirm their devotion to military values, bravery, loyalty, and obedience to duty, to demonstrate technical efficiency, especially in communications and in the processing industries, and to advertise the colony's attractiveness to both tourists and immigrants. Above all the tour focused the attention of the British press on New Zealand and gave the Liberal government an unparalleled opportunity to advertise the success of its reform program.[2]

George lacked the intellectual sharpness of his two predecessors as well as their cosmopolitan outlook and European experience. However, he did understand the Empire better than any prime minister and used his exceptional memory for figures and details, whether of uniforms, politics, or relations, to good effect in small talk with his subjects.

When his father died on May 6, 1910, George became King George V; his coronation in Westminster Abbey was June 22, 1911. Shortly afterward he and Queen Mary journeyed to India, where a spectacular coronation ceremony ("durbar") was held at Delhi, which the king–emperor declared the new capital of India. The king's visit to Port Sudan in January 1912 was used by the British-dominated Sudanese government as an occasion for imperial display, intended to impress both the Sudanese and the British, and was subsequently reworked as the annual celebration of King's Day. It demonstrated British dominance of the Sudan making clear the minor role played by Egypt, the co-ruler under the Anglo-Egyptian Condominium. The visit impressed the king and potential British investors in economic projects. Sudanese political elites from the Arab regions were active participants, seeking to consolidate their positions through demonstrations of loyalty to the king and to demonstrate the authority they gained as a reward. But the British could not impose full-scale imperialism as a primary identity in the Sudan, because of the Egyptian claims and because of the Sudan government's use of preexisting hierarchical Sudanese political structures to provide an ordered framework for government.[3]

At home the new king faced two crises, the first of which concerned the Liberal Party's demand to curb the House of Lords, which was blocking its legislation. At the request of prime minister Herbert Asquith, the king reluctantly agreed to create enough new peers to enable the Parliament Bill to be passed if this should be necessary; the threat proved sufficient and the lords accepted the bill. The second crisis concerned the proposal for Irish Home Rule. The army was on the verge of mutiny as top officers rejected the idea of coercing their fellow Protestants in Ulster. In 1914 the king summoned a conference of all parties; a settlement was postponed when the world war broke out. After an uprising in southern Ireland, the king made an important conciliatory speech before the opening session of the Northern Ireland ("Storemont") Parliament on 22 June 1921. The British Cabinet had a significant role in drafting the speech, which was the principal catalyst in Britain's change to a peace policy in Ireland leading to a truce in the south and the signing of the Anglo-Irish Treaty in 1921, which made Ireland independent.[4]

The King was a cousin to the Czar of Russia and the Kaiser of Germany, but the latter were bent on war and Britain was drawn in by its pledge to guarantee Belgium's neutrality, which Germany violated. With the outbreak of World War I in 1914, the king resigned all German titles for himself and his family and changed the name of the royal house from Saxe-Coburg-Gotha to Windsor. He adapted his royal functions to the rigors of war and visited the western front regularly. An accident in France permanently affected his previously good health. In 1916 Queen Mary helped the British Red Cross set up a home for severely disabled troops. Thus, the Royal Star and Garter Home became an important institution for disabled servicemen who need nursing care, recovery therapy, and employment opportunities.

In 1917 George V changed the name of the royal dynasty from Saxe-Coburg-Gotha to Windsor in an attempt to purge it of German associations.

In recent years George V has come under criticism for his laissez-fair attitude towards Bolshevism - particularly the revelation that he forbade the Royal Navy from rescuing the Russian Royal Family and did nothing to prevent the communists from murdering them.

As the war ended the king and his top advisers were deeply concerned about the republican threat to the British monarchy. They associated republicanism with the rise of socialism and the growing labour movement. Their concerns, although exaggerated, resulted in a redesign of the monarchy's social role to be more inclusive of the working class and its representatives—a dramatic change for George, who was most comfortable with naval officers and landed gentry. In fact the socialists no longer believed in their anti-monarchical slogans and were ready to come to terms with the monarchy if it took the first step. George took that step, adopting a more democratic stance that crossed class lines and bringing the monarchy closer to the public. The king also cultivated friendly relations with moderate Labour party politicians and trade union officials. George V's abandonment of social aloofness conditioned the royal family's behavior and enhanced its popularity during the economic crises of the 1920s and for over two generations thereafter. Therefore, in 1924 the king was willing, in the absence of a clear majority for any one of the three parties, to replace Conservative Prime Minister Stanley Baldwin with Ramsay MacDonald, the first Labour Party prime minister. King George's tactful and understanding reception of the first Labour government (which was short-lived) allayed the suspicions of the party's sympathizers throughout the nation.[5]

Throughout the Coal Strike and the General Strike of 1926, the king used every means in his power on the side of conciliation, to the conventional limits of a constitutional sovereign's function, which is "to advise, to encourage and to warn." He made another intervention during the economic crisis of 1931, when he carried on protracted negotiations with the party leaders and invited MacDonald to head a National (coalition) government. The general election of October 1931, not the formation of the first National Government in August 1931, determined the direction of politics during the 1930s. Between 1929 and the formation of the second National Government after the election, the Liberal Party had been a major participant in the political system, a position it lost when Liberal defectors coalesced with the dominant Conservatives during and after the election. The king played a crucial - and very active - role in the formation of both National Governments, and may have been a determining influence on Prime Minister Ramsay MacDonald each time.[6]

King George's influence was always used on the side of moderation. The example he set, his sense of duty, his loyalty to those who served him, and his impartiality did much to inspire his ministers of all parties and to discourage party strategems. He was by temperament a cautious conservative who dimly understeed the revolutionary changes in the postwar world. But he had few vices and was earnestly devoted to his nation and Empire.

He was seriously ill in 1928 and 1929 and was in poor health thereafter, but he carried out his duties to the end. Radio was new and the king broadcast his Christmas radio messages to the Empire, starting in 1932; by their simplicity and friendliness, they had a wide appeal. In May 1935 he celebrated his silver jubilee amidst great expression of popular affection. He died on January 20, 1936.[7]