From Conservapedia
(Redirected from Great Pyramid)
Jump to: navigation, search 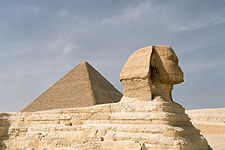 The Great Pyramid of Khufu seen behind the Great Sphinx. The pyramid is the largest in Egypt, and one of the largest stone structures ever constructed. It is widely seen as a symbol of the sophistication and organisational ability of Pharaonic civilization.

The Great Pyramid of Giza (2650 BC) is the largest of the Egyptian pyramids, and was built by the Pharaoh Khufu. It is believed to have been his final resting place, although his remains were never located. It is one of the Seven Wonders of the Ancient World, and is the only member of that list that remains mostly intact.

The structure originally stood 481 feet high and was the tallest and overall largest structure on Earth until the nineteenth century. With the exception of certain dams, the Great Pyramid remains one of the largest manmade structures on the planet in terms of mass. It consists of approximately 2 million blocks of stone, each weighing more than two tons. Each side of the pyramid measures 751 feet across, and the lengths of the sides vary less than 0.1%. Each corner of the pyramid is precisely lined up with cardinal directions of the compass.[1]

As a single project, the Great Pyramid was the most ambitious attempted by the Egyptians during the Old Kingdom, and was undoubtedly a triumph of engineering, mathematics, organisation and planning. It is considered by many to be a testament to the power, stability, beliefs and skills of the Old Kingdom state, and its ability to harness and deploy resources on a massive scale in a highly integrated operation spanning a huge area.

The exact means of construction remain extremely contentious, but it is now accepted within the academic community that construction took around 20 years, meaning that it was both begun and completed within Khufu's reign. The workforce is estimated to have been around 20,000 strong, consisting of a mixture of full-time professionals, administrative staff and temporary labourers who worked for approximately three months per year during the inundation (See: Labour in Ancient Egypt). Khufu set up local limestone quarries on-site to obtain the internal limestone blocks, though the fine, white limestone used for the outer casing stones (now missing) had to be shipped across the Nile from Tura.Various other stones were also used in the paving, causeway, valley and pyramid temples, including granite and travertine, shipped in from as far afield as Aswan and Hatnub.