From Conservapedia
(Redirected from Haymarket Affair)
Jump to: navigation, search 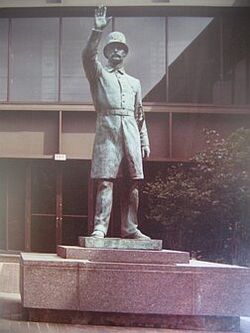 Monument in Chicago to the police victims

The Haymarket Riot was an attack on police in Chicago on May 4, 1886, when police broke up a workers' demonstration organized by anarchists. It is also sometimes referred to as the Haymarket massacre or Haymarket affair.

On the day before May 3 laborers had attacked police at the McCormick Reaper Company, which had hired nonunion workers during a strike. One person was killed, and the anarchists accused the police of brutality, calling a protest rally at Haymarket Square the next day. When police tried to disperse the rally, a bomb exploded in police ranks and rioting erupted. Eleven people were killed, including seven police.

The bomber was never positively identified, but historians generally agree the bomb was made by one of the anarchists. Eight anarchist leaders were convicted as accessories to murder. Four were hanged, one committed suicide, and three were jailed. In 1893, Governor John Peter Altgeld of Illinois, a left-wing Democrat, pardoned the three survivors. That action identified Altgeld and the left of the Democratic Party with violent radicalism, and helped defeat William Jennings Bryan in the 1896 presidential election.

The episode tainted the American labor unions with violent radicalism. In fact the unions were not violent; it was a matter of a small anarchist cell which had no members involved in the actual strike seizing the moment to try to destroy capitalism, but instead wounding the labor movement.