From Conservapedia
(Redirected from John Paul I)
Jump to: navigation, search 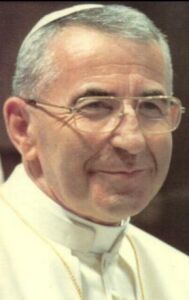 He took his name by combining the name of his two immediate predecessors, Paul VI and Pope John XXIII. The last Italian-born Pope to date, he was the Vicar of Christ (the title given to the Pope) for only 30 days before dying of a heart attack in his sleep, though conspiracy theories continue to allege that he was assassinated.