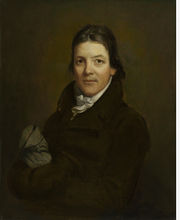 John Randolph of Roanoke (1773-1833) was a Virginia orator and powerful Jeffersonian Republican member of the House of Representatives and the Senate. A leader of the "Quids" or "Old Republicans,", he was deeply committed to republicanism and was an articulate advocate of Jeffersonian Democracy, although he broke with Jefferson because he feared Jefferson had abandoned true republicanism.

Born into the Randolph family—the most powerful family in Virginia—Randolph was always in poor health; he studied at Princeton and William and Mary. he was first elected to Congress in 1799. In 1801, at age 28, he became chairman of the powerful House committee on ways and means and was in effect the administration leader and spokesman.

A master of parliamentary rules, he used his brilliant but nasty wit to browbeat opponents. For hours on end his shrill but flute-like voice irritated and fascinated, pouring out shafts of biting wit, literary allusions, epigrams, parables, and figures of speech, all to the point of defeating his opposition.

His support of the Louisiana Purchase was a surprise for it violated his philosophy of state rights and strict construction of the Constitution. He led the Jeffersonian attack on the federal judiciary, but as manager of the impeachment of Justice Samuel Chase he was easily outwitted because he was not a lawyer, did not understand the legalisms and hurt his cause by intemperate eloquence. Chase was acquitted, thus ending the effort to seize control of the Supreme Court, and Randolph took the blame; it was a bitter disappointment to him and a blow to his reputation.

Convinced there was profound corruption in a complicated land deal known as the "Yazoo claims," he decided Jefferson, Madison and other top administration leaders were corrupt, and he broke with them and lost his leadership role. He kept his chairmanship for a while, and thus his power. But as new Congressmen arrived with equal legislative and oratorical skills, and stronger political bases, such as Henry Clay and John C. Calhoun, he became more and more irrelevant. In 1825 in the Senate, his mind was disordered and his speeches, while still brilliant, were more than ever extravagant, irrelevant, and eccentric. He never lost his mordant wit; suspicious of Clay and bitterly hostile to President John Quincy Adams, in 1826 he described the alliance of these two leaders as "the coalition of Blifil and Black George," the combination "of the Puritan with the blackleg."

He was the most prominent delegate to the Virginia constitutional convention of 1829–30, where he defensed eastern tobacco interests against the westerners. Opposing any significant change in the constitution of the state he was responsible for the victory of the conservatives—and the ultimate secession of West Virginia. The new president Andrew Jackson appointed Randolph as minister to Russia—a disastrous mistake. His health broke down in Russia and he returned in less than a month. By 1831 he was demented; he drank excessively, used opium, and though previously a kind master was harsh and abusive to his hapless slaves, who, he was convinced, had been faithless in his absence. Starting with a rich inheritance he finally owned more than 8,000 acres of land, nearly 400 slaves, and a valuable stud of blooded horses.

Suffering from various hormonal deficiencies (he never had to shave, and was impotent), Randolph aged rapidly—even at age thirty he looked like an old man. He suffered insomnia, chronic diarrhea, and rheumatism; he died of tuberculosis.

When Randolph broke with Jefferson and James Madison in 1806, his Congressional faction was called "quids" that sought a return to the Principles of 1798. Randolph was the leader of the "Old Republican" faction that insisted on strict adherence to the Constitution and opposed any innovations. He made no effort to align with either quid faction in the states and made no effort to build a third party at the federal level. Randolph supported James Monroe against Madison during the runup to the presidential election of 1808, but the state quids supported Madison. They were led by Randolph, who had started as Jefferson's leader in the House and became his bitterest enemy. Randolph denounced the Yazoo Purchase compromise of 1804 as totally corrupt. After Randolph failed in the impeachment of a Supreme Court justice in 1805, he became embittered with Jefferson and Madison, complaining, "Everything and everybody seem to be jumbled out of place, except a few men who are steeped in supine indifference, whilst meddling fools and designing knaves are governing the country."[1] He refused to help fund Jefferson's secret purchase of Florida from Spain. Increasingly, Randolph felt that Jefferson was adopting Federalist policies and betraying the true party spirit. He wrote to an ally that "the Administration....favors federal principles, and, with the exception of a few great rival characters, federal men.... The old Republican party is already ruined, past redemption. New men and new maxims are the order of the day." [2]

Randolph as a public man was usually a leader of the opposition. His reputattion comes as a constitutional purist, a states rights exponent of small national government, an unsparing critic, a merciless castigator of corruption, which sometimes he imagined and which he always saw as the great enemy of republicanism. He was the champion of lost causes. "I am an aristocrat"; he proclaimed, "I love liberty, I hate equality". As for states rights, he said, "Asking one of the States to surrender part of her sovereignty is like asking a lady to surrender part of her chastity."

Randolph's conservative stance, displayed in his arguments against debt and for the rights of the landed gentry, may be attributed to his ties to his family estate and to his adoption of the elitist values of Southside, Virginia, where he was raised. Randolph opposed the War of 1812 and the Missouri Compromise and was active in debates about tariffs, manufacturing, and currency. However, he had mixed feelings about slavery. While opposed to the slave trade abroad and in the capital, Randolph remained dependent on slaves to work his land.

Popularity then and now

Randolph won 14 Virginia congressional races, 1799-1833 because he was always available and was the most articulate representative of old Republican values, which he complained Jefferson had abandoned. Randolph was never a democrat, and always presented himself as an aristocrat. Voters had esteem for his eminent family, and enjoyed both his fiery character, and his lively electioneering methods. Randolph appealed directly to freeholders, using entertaining and enlightening oratory, sociability, and community of interest, particularly in agriculture, that led to an enduring voter attachment to him, and that discounted serious personal deficiencies. His defense of limited government appeals to 21st century conservatives, especially Russell Kirk and Richard Weaver.