From Conservapedia
(Redirected from Martyrdom)
Jump to: navigation, search

A martyr is a person killed for supporting a religious or other cause. Often, his or her death will inspire others to take up the cause. The word "martyr" comes from the Greek word μαρτυς (martus), meaning "witness", which appears 20 times in the New Testament, along with other forms having the same root meaning of "testimony", "evidence" and "witness", μαρτυρέο martureo, μαρτυρία marturia, μαρτύριον marturion, μαρτύρομαι marturomai. See Strong's numbers 3140, 3141, 3142, 3143, 3144.

After Jesus Christ, the original Christian martyr or proto martyr was Stephen (Acts 7:59-60). The famous apologist Justin Martyr was killed for his faith in Christ in A.D. 165. Many of the early Church Fathers were martyred. In fact, according to tradition, only one of the Twelve Disciples (The Apostle John) died of natural causes. 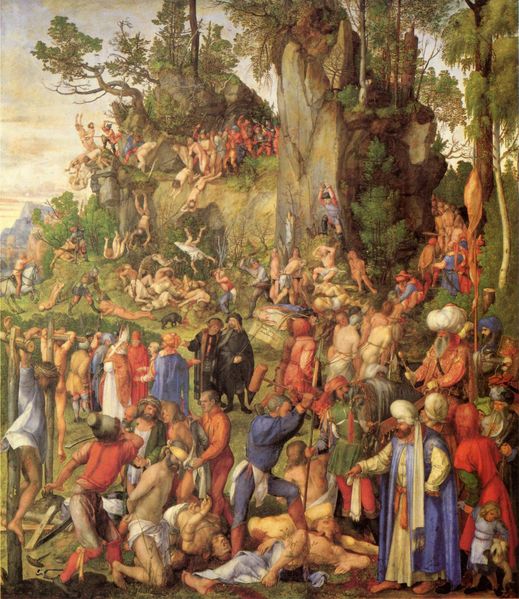 Martyrdom of 10,000 Christians by Albrecht Dürer
Retrieved from "https://conservapedia.com/index.php?title=Martyr&oldid=1617947"
Categories: