From Conservapedia
(Redirected from Ra–Horakhti)
Jump to: navigation, search 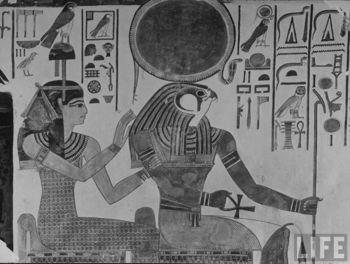 Ra-Horakhti with Hathor (left), depicted in tomb of Nefertari (QV66)
Ra is a prominent creator god in Ancient Egyptian religion, and the most prominent aspect of the Heliopolitan Sun God (the triad of Atum, Ra and Kehpri). The cult of Ra reached its zenith in the Old Kingdom, when Ra became the primary state god of Egypt.

The name of Ra can be directly translated in Egyptian as ‘Sun’. “The Litany of Ra” invokes the god 74 times with different names and titles, some linking Ra to Osiris, stressing Ra’s importance in the netherworld and afterlife. Titles from this text include “He Who Has Command Over His Cave”, “He of the Netherworld” and “He Who Renews the Earth”.

He is also titled “Lord of Heliopolis”, and in the Book of the Dead as “King of the Gods”, “Sole Lord”, “Lord of the Gods” and “Power of Powers”, all of which emphasize sovereignty and kingship. “Unique One” and “Sole One” may refer to either creator or sovereign roles, whist “Lord of the Sky” and “Great Illuminator” emphasize solar attributes. “Sovereign Who Made the Gods” refers to both sovereign and creation roles.

Ra is most frequently portrayed as a falcon-headed man with a sun disk, though he may also be seen in fully zoo-morphic form with a Sun disk, and within composite images purely as a sun disk.

The falcon association strengthened the association between Ra and Horus (as Ra-Horakhti) and with concepts of Kingship in a wider sense. Indeed, it is various combinations of the Falcon and sun disc which form the strongest, most instantly recognizable and most enduring iconography for the cult of Ra.

The Mnevis bull also held solar associations, and was regarded as the herald of Ra. A bull was kept and buried with full honors in Heliopolis, where some burials have survived.

The Benu Bird was a sacred bird linked to Ra, in addition to Atum and Osiris, and is mentioned in the Pyramid Texts and the Book of the Dead. In the former, it is described as a Lapwing, but by the New Kingdom, has come to be depicted as a Heron, the Lapwing having come to symbolize the Egyptian people.

On occasion Ra is also associated with the cat, and a number of New Kingdom tomb scenes depict him in this form, slaying the serpent of chaos.

Associations and Links With Other Deities

Ra is the aspect of the Heliopolitan triad most associated with other deities, his associations with Amun (as Amun-Ra) and Horus (as Ra-Horakhti) being most important. The latter was particularly prominent in the 19th Dynasty, with numerous temples dedicated to Ra-Horakhti in Nubia. Ra was also associated with other major cults, including Sobek (Sobek-Ra), Osiris, Hathor/Sekhmet, and Bast, the goddesses being seen as daughters of Ra.

Cult Center and Other Centers of Worship

Heliopolis, located in the Ain-Shams/Matariyeh area of Cairo, was the cult center of Ra, and, indeed, the Atum–Ra-Khepri Heliopolitan triad, though many shrines and temples existed elsewhere. The site was heavily quarried from the Ptolemaic period onward, and little now remains

The earliest attested activity at the site dates to the reign of Djoser, and there are surviving remains of work by Senusret I and numerous New Kingdom rulers. Development of the site appears to have ceased in the Ptolemaic era.

Other main temples included was a large temple to Ra-Horakhti located in Per-Ramesses, as well as a shrines in many other temples, and numerous Egyptian built temples in occupied Nubia, the most significant being at Abu Simbel and Sebua.

In addition to these are the Sun Temples of the 5th Dynasty, built as part of the pyramid complexes of the era. Their exact purpose has yet to be fully interpreted, as remains are fragmentary (only two have been excavated), and it is uncertain whether or not these temples existed as a focus for the cult of the individual Pharaohs who built them, or served the cult of Ra more directly. Further research is hampered by the present military status of the area in which they are located.

Sun courts, where the Sun God could be honoured in any of his forms, also existed in most Egyptian temples, perhaps the one of the most impressive surviving examples being the Sun Court of Amunhotep III at Luxor Temple.

The last month of the Egyptian year, the 4th month of summer, was named “The Birth of Ra”, and his birthday was celebrated on the last day of the month, as was the first day of the new year, suggesting a single prolonged celebration.

Impact on the Ideology of Divine Kingship

The Heliopolitan mythology had a huge impact upon the ideology and expression of the Pharaonic state. From the 4th Dynasty onward rulers take the title “Son of Ra”, a trend which would continue into the Greco-roman period.

There is evidence of earlier royal involvement in the cult, however, with Djoser erecting a shrine in Heliopolis, and bestowing important positions upon a high-ranking Heliopolitan priest, Imhotep. This suggests that the cult already had a key ideological role at this stage. Earlier still, the 2nd Dynasty ruler, Nebra is the first King to have a name invoking solar mythology. As such, it is clear that the solar cult was a key factor in shaping the nature of the Pharaonic state from an early period.

A series of interlinked tales preserved in Papyrus Westcar (P. Berlin 3033) are particularly telling of the role of the Sun God in the ideology of Divine Kingship. In the text, the 4th Dynasty ruler Khufu is told that his sons will only hold the throne for two generations, for Ra has caused the wife of one of his priests to bear his children, and that they shall rule.

Impact on Funerary Beliefs and Practises

The Heliopolitan cult had a huge impact on funerary beliefs, most spectacularly in a revolution in royal funerary architecture. The solar connotations of the pyramid complex are widely accepted, and attested to by inscriptions found upon the capstone of Amenemhat III.

During the 5th Dynasty, the design of the pyramid complex was modified to incorporate a Sun temple, and, beginning with Unas, the Pyramid Texts are found inscribed in the burial chamber.

In these texts it is clear how the Heliopolitan solar mythology has influenced not only the imagery, but the nature of the royal afterlife. The Pharaoh now hopes to ascend to heaven where he may join the solar baroque and sail with the Sun God (Pyramid Texts #407).

The solar cult also affected the non-royal afterlife. The Coffin Texts include numerous references to the Sun God, and maintain much of the celestial image of the afterlife found in the Pyramid Texts. In the New Kingdom the Coffin Texts are displaced by the more Osirian Book of the Dead, which would be used by both royals and commoners. However, the Solar Cult retains an important position in the new text, with numerous prayers to the Heliopolitan gods.