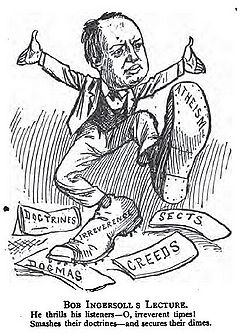 Colonel Robert G. Ingersoll (1833-1899) was a prominent American agnostic lecturer and writer. A hero from the Civil War and a leading Republican, he was one of the most dynamic speakers of the late 19th century, but he made few converts to his cause. Ingersoll commanded a cavalry regiment in the Civil War until he was captured by the Confederates. After the war, he served as Illinois Attorney General. He was a prominent member of the Republican Party. Although Ingersoll never held an elected office, he was nonetheless an active participant in politics. His greatest speech was the "Plumed Knight" nomination of James G. Blaine for president in 1876. Blaine lost the nomination.

Ingersoll's sudden death gave rise to unfounded rumors that he had made a conversion to religion on his deathbed.

Although his agnosticism was controversial, his legal and political theories reveal a faith in scientific rationality and human progress, common ideas for modernizers of the Gilded Age. He was a friend of poet Walt Whitman.

Statue of Ingersoll in Peoria, Illinois

The Council for Secular Humanism operates the Robert Green Ingersoll Birthplace Museum at his first home in Dresden, New York.[1] It was listed on the National Register of Historic Places in 1988.[2]

The town of Redwater, Texas, was originally named Ingersoll in honor of Ingersoll when it was founded in the mid-1870s; the current name was adopted after a revival meeting held in the town in 1886. Colonel Bob Mountain in Washington state was named for Ingersoll.[3]