Romeo and Juliet is a play written in 1595 by William Shakespeare. It is the tragic love story of Romeo Montague and Juliet Capulet, who are from rival families. They devise a scheme to marry, but unfortunately their plans end tragically. 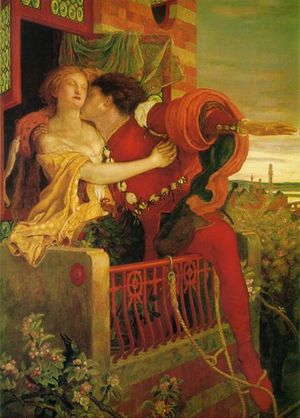 Following a brief prologue, the play opens with a brawl in the streets of Verona between members of the households of Montague and Capulet, which must eventually be stopped by the Prince. He scolds the warring patriarchs and the townspeople who have joined the fray, telling them not to fight among themselves. Romeo Montague then speaks to his friend Benvolio, telling how he is desperately in love with a woman, Rosaline, who has "sworn that she will still (always) live chaste" and therefore have nothing to do with him. In the next scene, Juliet's father, Old Capulet, talks to a young man named Paris who hopes to marry Juliet. Old Capulet is enthusiastic about this match, but considers Juliet too young to marry at the moment; he tells Paris to wait a few more years, then gives instructions to a servant regarding a banquet that will be held that night. Benvolio and Romeo encounter the servant and are told about the banquet, and conspire to attend it in disguise (as Rosaline will be there, and Benvolio hopes to distract Romeo from his unrequited love by showing him a bevy of much more beautiful women).

At the Capulet house, Lady Capulet informs her daughter of Paris's intentions, and she and Juliet's Nurse speak highly of Paris. The banquet begins, and Romeo and his friends arrive in disguise to avoid recognition. Tybalt notices their presence and attempts to have them thrown out, but Old Capulet notices Romeo's noble bearing and allows him to stay. Romeo and Juliet meet for the first time, dance together, and speak to each other in highly metaphorical and poetic language. After Romeo leaves, Juliet asks the Nurse who he is and is devastated to learn that he is "the only son of [her] great enemy" Montague. She professes to have fallen in love with him at first sight.

In a scene famous for its well-known lines, Romeo climbs over the walls of Capulet's orchard to see Juliet. Juliet speaks to him from the balcony and after much amorous conversation, they agree to elope. In the morning, Romeo goes to Friar Laurence to obtain his help in his marriage. While Friar Laurence has reservations about Romeo's hasty switch from Rosaline to Juliet, he decides to help to "turn your household's rancour to pure love." Meanwhile, Romeo's best friend, Mercutio and Benvolio discuss Romeo and Tybalt's challenge to him. Shortly after, Romeo meets with the Nurse who agrees to help arrange the marriage. Later on that day, Romeo and Juliet are married.

Immediately following the marriage, Tybalt meets with Mercutio and Benvolio, trying to find Romeo. When Romeo arrives, he denounces him as a villain, but Romeo returns only kind words to his cousin by marriage. Mercutio is incensed at Romeo's mildness and duels with Tybalt. Romeo tries to part them, but while standing in the way, Tybalt takes advantage of Mercutio and stabs him under Romeo's arm. Mercutio is taken away mortally wounded repeating, "A plague on both your houses!" When Romeo hears of Mercutio's death, he is overcome with rage and fights with Tybalt. Tybalt falls. The Prince decides since Tybalt was already condemned by law, Romeo should only be banished. This puts both Romeo and Juliet into deep sorrow and grief.

Romeo parts from Juliet after one night with her and departs for Mantua. In the morning, Juliet's parents try to bring her joy from her supposed sorrow over her cousin, by marrying her to Count Paris. Juliet is unwilling and receives the condemnation of her parents. Even her nurse, who is aware of her marriage, councils her to marry Paris! Friar Laurence gives her a potion to drink so that she will appear dead and will be laid to rest in the tomb of Capulets. He also says he will arrange for Romeo to come secretly and take her with him to Mantua.

However, Friar John fails to deliver the news of this to Romeo and Romeo instead learns of Juliet's death. He decides to go to her tomb and commit suicide. When Juliet is laid to rest in the tomb, Paris lingers there to mourn for her. Romeo arrives and Paris, assuming as a Montague he comes to violate their tomb, draws on him. Romeo reluctantly kills him. Romeo then goes into the tomb and kissing a "dead" Juliet drinks poison and dies. Laurence arrives and finds Romeo and Paris dead and Juliet waking. As members of the watch come near, he tries to take Juliet away, but she remains and kills herself on Romeo's sword.

The watch finally arrive and retain several of the people present. The Prince of Verona arrives and calls for Montague and Capulet. Montague comes announcing the death of his grieving wife, Lady Montague. Friar Laurence is left to explain the marriage of Romeo to Juliet. Over Romeo and Juliet's dead bodies, Montague and Capulet reconcile.

The Montagues and their followers

Romeo: A young man who lives in Verona and is a member of the Montague family.

Old Montague: Romeo's father, and one of the two warring patriarchs whose dispute forms the conflict of the play.

Mercutio: A friend of Romeo's, and a kinsman of the Prince of Verona. He is killed in the third Act by Juliet's cousin Tybalt. His name may be a derivative of "mercurial," suggesting his fiery and unpredictable personality.

Benvolio: A friend of Romeo's and Mercutio's, and the one who usually acts as the peacemaker and voice of reason in the group. His name may be a derivative of "benevolent."

Friar Lawrence: An elderly monk who is a friend of Romeo's and attempts to help the two lovers be together. It is he who marries them in secret, and he who conceives the idea of Juliet's faked death that leads to the central tragedy of the play.

The Capulets and their followers

Juliet: A young girl (her age is given as thirteen in Act I, scene iii), a member of the Capulet family, who falls in love with Romeo.

Old Capulet: Juliet's father, and one of the two warring patriarchs whose dispute forms the conflict of the play. He and his wife, Lady Capulet, play a substantially larger part than the Montagues because of the sub-plot involving Juliet's planned marriage to Paris.

Tybalt: Juliet's cousin. He is killed by Romeo in the third Act, leading to Romeo's banishment from Verona.

Nurse: Juliet's elderly nurse and companion, who has raised her from childhood. She is aware of the romance between Romeo and Juliet and carries messages between them, attempting to help them be together.

County Paris: A young noble who hopes to marry Juliet and whose intentions are supported by Old Capulet. Although Juliet despises him, he seems to have genuine feelings for her that are not motivated by money or physical attraction. He is killed by Romeo shortly before the end of the play.

"A pair of star-cross'd lovers take their life;
Whose misadventured piteous overthrows
Do with their death bury their parents' strife."
-Prologue

"But soft! what light through yonder window breaks?
It is the east and Juliet is the sun."
-Romeo, Act II, Scene 2

"What's in a name? that which we call a rose
By any other name would smell as sweet;"
-Juliet, Act II, Scene 2

"For never was a story of more woe
Than this of Juliet and her Romeo."
-Prince Escalus, Act V, Scene 3, (last lines of the play.)