From Conservapedia
(Redirected from Schroedinger's Cat)
Jump to: navigation, search 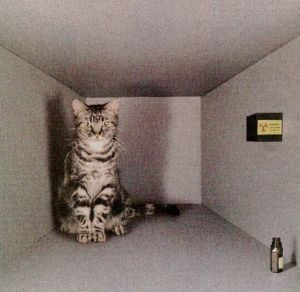 An implication of this principle of quantum mechanics is that the Resurrection is entirely possible, similar to how quantum tunneling works despite violating traditional laws of physics.

In a paper entitled The Present Situation in Quantum Mechanics, Schroedinger wrote the following:

One can even set up quite ridiculous cases. A cat is penned up in a steel chamber, along with the following device (which must be secured against direct interference by the cat): in a Geiger counter there is a tiny bit of radioactive substance, so small, that perhaps in the course of the hour one of the atoms decays, but also, with equal probability, perhaps none; if it happens, the counter tube discharges and through a relay releases a hammer which shatters a small flask of hydrocyanic acid. If one has left this entire system to itself for an hour, one would say that the cat still lives if meanwhile no atom has decayed. The psi-function of the entire system would express this by having in it the living and dead cat (pardon the expression) mixed or smeared out in equal parts.[1]

In lay terms, Schrödinger's experiment results in a paradox: According to the quantum mechanical model, because the cat's "live-ness" is not being measured directly, there is no way to know whether or not it is alive or not. As a matter of fact, quantum mechanics dictates that it is existing in both states simultaneously. Such behavior is not encountered in daily life, but is accepted as possible behavior for subatomic particles.

The Copenhagen interpretation is the interpretation dealing fundamentally with decoherence. Because quantum mechanics is a statistical method of describing the physical world, there are multiple states that a system can exist in at the same time; this is the principle of superposition. A quantum system is said to always be in a state of superposition until the system is measured, at which point the system decoheres and assumes a unique value. Such behavior has been the basis of revolutionary research into computing technologies (see quantum computer). This interpretation also questions at what time the "measuring" of the system takes place; for instance, a fundamental aspect of the system is measured when a nucleus decays and the event is recorded by the Geiger counter.[2]

The many-worlds interpretation deals with the concept that measuring the system is not a significant act. Instead, both states exist simultaneously, but are decoherent with each other, meaning that there is no communication between them. When the system is observed or measured (the box opened), the observer becomes entangled with the system, and essentially, two new observer states are formed - an observer who discovers a dead cat, and an observer who discovers a living cat. At this point, the universe "splits" into two branches or separate universes that are unable to communicate with each other.[2][3]