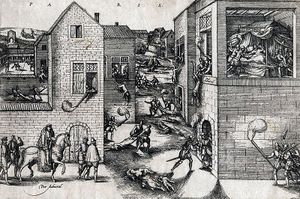 Engraving of the massacre created shortly after the carnage.

The Saint Bartholomew's Day Massacre was a major massacre of Huguenots by Roman Catholics in France, starting August 24–25, 1572 but lasting for months in some areas.

A major reason for the massacre was the unstable politics of France during the 16th Century.[1][2]

After King Henri II died in 1559, he was succeeded by his weak sons.[1] In addition, the Protestant Huguenots flourished in France since the Protestant Reformation, and they were becoming a very strong force, despite strong persecution against them.[1] Over a third of the population were estimated to have become Protestant.[3] In the French court, strong Huguenot and Roman Catholic factions struggled for influence over French religious policy.[1] Additionally, there were three religious wars between Roman Catholics and Protestants between 1562 and 1570, and much violence occurred between the two groups even between the wars.[1]

The wedding and attempted murder

On August 18, 1572, Henri of Navarre, a Protestant prince and one of the leaders of the Protestant faction in the French court, married Margaret of Valois, the sister of Roman Catholic King Charles IX, in Paris.[1] Although the reason for this wedding was to reduce tensions and build peace between the Roman Catholics and Huguenots, it did not do so, and many Catholics strongly opposed the marriage (it is also very possible that the marriage was arranged in order to lure the Protestant leaders into one area).[1] Additionally, the marriage made Charles IX appear to endorse the Protestant cause.[1] Many Roman Catholics, particularly Charles's mother, Catherine de Medici, worried that Charles was under the influence of Huguenot Admiral Gaspard de Coligny and about to approve Coligny's plan to attack the Spanish colonies in the Netherlands and effectively transport the religious wars out of France to the area.[1][2]

On August 22, an assassin named Maurevert shot Coligny twice in an attempted murder.[1] Though wounded, he survived.[1][2] While some historians disbelieve that Catherine de Medici ordered the murder,[1] most accept that she ordered and approved of it.[1][2][4] Although Charles IX promised to investigate the attempted assassination and bring justice, the Huguenots did not trust him.[1]

On the evening of August 23, King Charles IX, Catherine de Medici, and several other nobles met and decided to completely annihilate the Huguenot leaders who were in Paris to celebrate the wedding.[1][2] That same evening, the Parisian municipal leaders were notified of the orders to murder the Huguenots.[1][2]

The massacre began around 4 A.M. on August 24.[1] One of the first Huguenots murdered was Coligny, who was thrown out of his bedroom window after being beaten.[4] Numerous Huguenot leaders were murdered.[1][2] However, Henri of Navarre and Henri of Condé were spared, even as those around them were murdered.[1]

By dawn, the plot to murder the Huguenot leaders become a general massacre of all Huguenots in Paris, including commoners, after the common Roman Catholic Parisians joined in.[1][2][4] Numerous Huguenots were violently and brutally murdered and their property was destroyed.[1][2] On August 25, Charles IX made an order that the killing stop.[2][4] Despite this, the killing did not stop, and it even expanded to several French provinces.[1][2][4]

The violence in Paris remained for almost a week,[1] and the massacres in the provinces, which began very soon after, continued into late October.[1][4] Death toll estimates vary,[2] but it is likely that 3,000 Huguenots were killed in Paris and that 70,000 were killed in France.[4] The number killed may have been as high as over 100,000.[3]

Many Huguenots escaped the carnage, with some fleeing to friendly French provinces and others to various Protestant European cities and countries.[1] Others recanted, either as a convenient temporary decision or permanently.[1] While Protestant leaders, such as Theodore Beza, were shocked by the apostasy, they knew that the Church would forever face intense persecution until Christ comes again.[1]

Medal by Pope Gregory XIII to commemorate the massacre

While Protestants in Europe were horrified at the massacre, Roman Catholic leaders celebrated the massacre (it is also true that some Roman Catholics did help the Huguenots[1]).[2][3] Gregory XIII, however, upon later learning about the full details of the massacre, refused to receive Maurevel when presented by the Cardinal of Lorraine on October 1572 and specifically referred to him as an assassin in reference to his shooting Coligny on August 22 as the reason for not receiving him, and Pope Pius V specifically denounced the intrigues against Coligny several years prior.[5] However, Gregory XIII celebrated the massacre in several ways, and Pious V supported war against the Huguenots,[5] although it is to be noted that in private, Pope Gregory had wept when he learned of the bloody circumstances.[6]

Because of the brutal massacre, many Calvinist Protestants came to hold the theological view that some forms of rebellion are just when the government is tyrannical.[1][2]

The massacre was the beginning of another religious war in France.[4] Peace was restored when Henri of Navarre, now King Henry IV of France and a Roman Catholic, issued the Edict of Nantes in 1589, which gave religious liberty to the Huguenots.[3] In 1685, King Louis XIV revoked the edict in the name of religious unity, and France has been in decline ever since.[3]

Effect on the U.S. Constitution