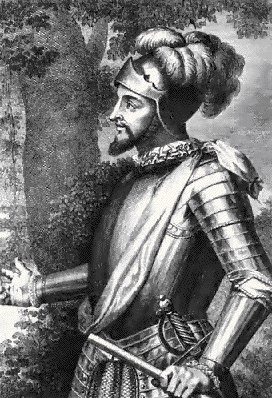 Vasco Nuñez de Balboa lived from 1475 to January 12, 1519. The historian Gonzalo Fernández de Oviedo y Valdés described Balboa as typical of the sons of lower Spanish nobility who sought fortune in the New World. They were in his words "men of good family who were not reared behind the plow." [1] He was a Spanish conquistador and was head of the first permanent European settlement on the South American continent. In 1513, he lead an expedition across Panama and became the first European to encounter the Pacific Ocean in the New World.

According to Spanish chroniclers, Balboa was born in Spain at Jerez de los Caballeros, a province of Badajoz, in 1475 to the Hidalgo family. "Since his family was not wealthy and there was little future for him at home, Vasco was sent at a young age, to learn the art of arms." [2] At the castle of Don Pedro Portocarrero (el Sordo), the Lord of Moguer, young Balboa master contemporary weapons of war and Spanish military science.

In 1500 Balboa was a stowaway to Central America, where he settled. In 1509 he proclaimed himself governor, by usurping and exiling those who had brought him (Enciso and Nicuesa). Gathering a few soldiers, he crossed the isthmus which would later be named Panama in search of gold and pearls. On 25 September 1513, he discovered what he named "Mar del Sur" or South Sea in English. This same body of water would later be named the Pacific Ocean by Magellan.[3]

In 1514 of Pedrarias Dávila was appointed the governor of the newly discovered regions. He is described by some as "an aged man of mediocre attainments, jealous, deceitful, and vindictive".[4] Balboa was nearly the reverse. Balboa's over-confidence and generosity let to carelessness. Balboa was ill-prepared to meet with the political intrigues which were soon set upon him. The Spanish Crown anointed Balboa with grand titles such as the Adelantado of the South Sea and Governor of Coyba. But his enemies adroitly diminished these titles to honors without any real power.

An intricate plot eventually left Balboa without allies in the New World and with several people whom he had trusted (including his wife) turning against him. He was beheaded for the crime of high treason in 1519. Although the case was trumped up and generally unfounded, the main pretext for the sentence fell back to Enciso and Nicuesa whom Balboa had usurped 8 years prior.