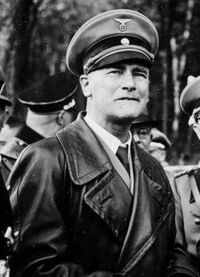 Wilhelm Frick (March 12, 1877 – October 16, 1946) was a prominent Nazi Party politician and the Minister of Interior Affairs under Adolf Hitler. He was eventually hanged at the postwar Nuremberg Trials.

Frick was one of the few prominent Christians in government of Nazi Germany. His attitude was largely unrepentant until the end at Nuremberg where Pastor Henry F. Gerecke said that "I was never very sure of Wilhelm Frick, Hitler’s minister of the interior. He did not make any outright confession. It was not till the night he went to the gallows that he assured me he had found his Savior while attending our services."[1]