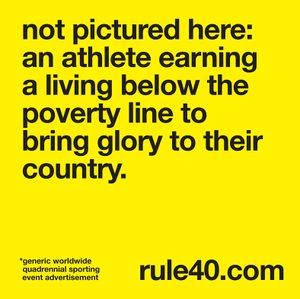 Graphic from the protest over Rule 40
The 2016 Summer Olympics was held in Rio de Janeiro, Brazil, beginning August 5. Opening ceremonies occurred in the Maracanã Stadium.

These Olympics were marred by liberals, and suffered a sharp decline in television ratings. Many athletes, particularly track and field athletes, rely upon sponsorships from manufacturers of shoes and athletic apparel to survive and find time to train. In many cases, the same company would continue to support the athlete for a number of years in exchange for that athlete wearing clothing or shoes that displayed the logo of the sponsor. However, Nike paid the International Olympic Committee for the right to sponsor the games and objected to other companies using social media to remind the public of their sponsorship of the individual athletes. Hence, the IOC enacted Rule 40, which set a blackout period during which if the other companies made reference to the athletes or used terms that the IOC felt referred to the Olympics, the athlete could be disqualified from the Olympic Games. In response, some of the other companies launched a sophisticated media campaign to make fun of Nike and the IOC.