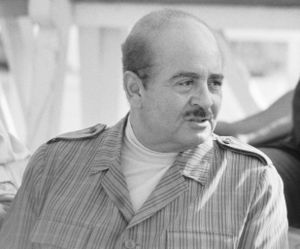 Adnan Khashoggi
Adnan Khashoggi (born July 25, 1935) is a Saudi Arabian businessman, who came to public attention in the Iran-Contra affair. In the early 1980s, his net worth reached an estimated $10 billion, making him one of the richest men in the world.[1][2]

Khashoggi's father was the personal physician to the Saudi King, and Khashoggi used that connection to become a middleman for people seeking to sell arms to Saudi Arabia. However, the Saudi royal family became troubled by Khashoggi's extravagant life style, and in 1975 King Khalid, acting with the Saudi Council of Ministers, issued a decree which retroactively banned "any middleman, sales agent, representative or broker" from receiving commissions on arms sales to his country.[3]

When Congress prohibited the Ronald Reagan administration from providing aid to the Contras in Nicaragua, an elaborate plan was implemented to sell arms to Iran and to use the profits to finance the Contras. Khashoggi played a role by providing a "bridge loan" to finance the arms sales.[3] Khashoggi was found to have borrowed money for these arms purchases from the later-bankrupt financial institution the Bank of Credit and Commerce International (BCCI) with Saudi and US backing.

Khashoggi was arrested in Switzerland on April 19, 1989 and extradicted to the United States on charges that he had helped Imelda Marcos smuggle money out of the Philippines.[3] In 1990, a United States federal jury in Manhattan acquitted Khashoggi and Mrs. Marcos of racketeering and fraud.[4][5]

From 1983 to 1989, Khashoggi served on the Board of Trustees of American University in Washington, DC.[6] Khashoggi pledged to donate $5 million toward a sports complex at AU, and the new $20 million building was named in his honor. However, he defaulted on his pledge and the building was renamed.[7]