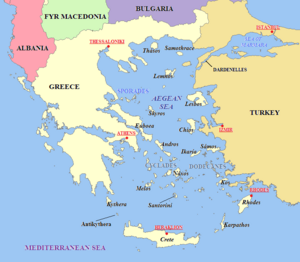 The Aegean Sea (Greek: Αιγαίο Πέλαγος Aigaíon Pélagos; Turkish: Ege Deniz), is a branch of the Mediterranean Sea, located between Greece and Turkey, with the Greek island of Crete generally considered as its southern boundary. The Aegean is also of considerable importance to Western culture as the birthplace of the first large European civilizations (Minoan, Mycenaen, Greek), as well as the concept of democracy.

The Aegean covers an estimated area of 83,000 square miles, approximately 380 miles long and 186 miles wide. On its northern side the Aegean is connected to the Black Sea via the Dardanelles straits, the Sea of Marmara, and the Bosporus. To the south, it is connected to the Mediterranean by the waterways on either side of Crete. A man-made canal (Corinthian) connects the Aegean through the Peloponnese Peninsula to the Ionian Sea on the west side of Greece.

The Aegean is relatively shallow compared to the rest of the Mediterranean; its deepest point is east of Crete at 11,627 feet. The large number of islands within the Aegean are suspected by geologists to be the mountain peaks of a submerged landmass (called “Aegeis”); these islands facilitated shipbuilding, trade and communication among the early peoples who lived on their shores, and contributed greatly to the rise of the civilizations which existed there.

The seafloor is predominantly limestone, with major alterations having occurred in recent geological times as a result of volcanic activity; indeed, the African tectonic plate moves northward, sliding under the European plate, and with such movement comes occasional earthquakes and volcanic eruptions, some of which have laid richly-colored sediments on the islands of Melos and Thera; on Thera one such layer is more than 80 feet thick, the result of a catastrophic explosion in the 15 century B.C. which played a role in the destruction of the Minoan civilization, and quite possibly was the source of Plato's Atlantis myth.

Islands in the Aegean Sea are predominantly Greek, and are considered part of seven groups:

Most of the islands are rocky and barren; cultivation is terraced on the smaller islands, while several of the larger ones (Crete, Lesbos, Rhodes, and Chios) have an advantage of fertile plains.

Fishing is very important to the economy of the Aegean since ancient times, as is wheat production, honey, olives, wine, figs, marble and other minerals.