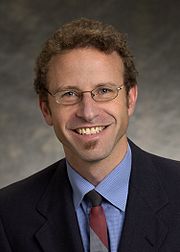 At the LBJ School, he teaches courses in global policy studies, is Coordinator of the Nuclear Proliferation Prevention Program, and leads a Pentagon-funded project on Constitutional Design and Conflict Management in Africa. He has published articles and book chapters on ethnic conflict, U.S. military intervention and nuclear proliferation.[1]

Kuperman wrote: The Limits of Humanitarian Intervention: Genocide in Rwanda (Brookings, 2001) and co-editor of Gambling on Humanitarian Intervention: Moral Hazard, Rebellion, and Civil War (Routledge, 2006). Kuperman holds a Ph.D. in Political Science from the Massachusetts Institute of Technology, and an M.A. in International Relations and International Economics from SAIS. In 2009-2010, he was awarded a fellowship at the Woodrow Wilson International Center for Scholars, in Washington, DC.

Kuperman in an article in the Boston Globe said that the pretense for intervention in Libya may turn out to be false.[2]

Qaddafi [never] threaten civilian massacre in Benghazi, as Obama alleged. The “no mercy’’ warning, of March 17, targeted rebels only, as reported by The New York Times, which noted that Libya’s leader promised amnesty for those “who throw their weapons away.’’ Qaddafi even offered the rebels an escape route and open border to Egypt, to avoid a fight “to the bitter end.’’ [3]