From Conservapedia
(Redirected from Android)
Jump to: navigation, search

Google Android is an open source operating system based on GNU/Linux, developed for use on mobile cell phones and tablets and is a joint effort of the Open Handset Alliance and Google. Anybody can create applications using the Android Software Development kit and Google has held contests for best applications. Many applications can be freely downloaded through the online Android Market and other online repositories. 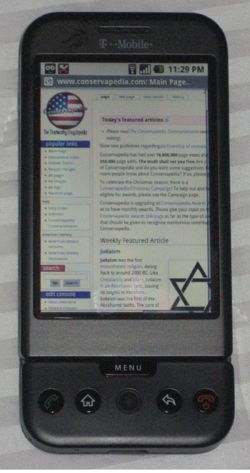 HTC, a smartphone manufacturer based in Taiwan, was the first to market a Google Android phone in the United States, called the HTC Dream. October 2008 was its launch date on the T-Mobile network, the only carrier offering the service. Branded by Google and marketed as the G1, it was a 3G phone which was Wi-fi capable. Smartphones using the Android operating system have gained a reputation as an Apple iPhone competitor. Many more Android phones have been developed since then, with large companies such as Samsung investing a great deal into the development and marketing of such devices.

The Android operating system is also preinstalled in some netbooks and tablets. In fact, Android 3.0 was specifically designed for tablets.[1] Since then, it has branched out to many tablets, smart TVs, smart watches, and smart home devices.

Several projects have taken Android off the phone and have converted it for desktop computers, referred to as Android x86. Former Google engineers based in China have created a multitasking version called Remix OS by Jide. Also, Phoenix OS by Beijing Chaozhuo Technology Co. Both versions are based on Lollipop 5.1.1 and were of course provided free of charge.

The Google Play store app (formerly "Google Market") is the most popular way to install new applications on Android. Some of these uploaded applications have been spyware.[2] In response to apps like this, Google has enabled the "killswitch", which allows Google Play to uninstall, or even install programs on the user's device, to fix the offending apps. While many have applauded this as a good anti-malware procedure, many have also expressed concern over Google's ability to install and remove software on all phones through the Google Play system.[3]

More vulnerabilities have been found in the Google Play system, which allowed installing software simply by clicking a malicious link. According to Chief Technology Officer Kevin Mahaffey, "When the malware gets on your phone it basically issues a blank check for additional apps to be downloaded"[4]

Other vulnerabilities have been found to exist from time to time, such as an issue called Quadrooter which was discovered in August 2016, which proved a serious security threat to hundreds of millions of devices.[5]

The Android OS is released by Google as open source software, at no cost. This means that it has become the OS of choice for many different devices. However, Google is a for-profit company, and it invests a significant amount of money into developing and maintaining Android. This leads to the obvious question of "what do they get out of it?"
Google has been very quiet in regard to how much they make from the Android OS. However, in a lengthy lawsuit against Google (starting in 2010, and continuing for over five years),[6] Oracle stated officially estimated that Google made $31 billion in revenue, $22 billion of which was profit, since 2008. This estimate was based on documents which Google provided in the course of legal proceedings, although they were seeking a monetary settlement, so a high estimate would be in their favor. However, Google did not contest this number.[7]
Google remains secretive about how much money they earn in what ways, but there are several apparent sources.

advertisements are shown when users search for applications in the Play Store, perform web searches (using Google search, which is the default) and more. Additionally, some applications are ad-supported, meaning that they display Google's ads in-app. These are ads which publishers are paying Google directly to display.[7]

Containing over 1.5 million applications, the Play Store certainly has a wide variety of apps to choose from. Many of these are offered for "free," although they are often ad-supported, as stated above (others farm user data). However, any application which the user buys, delivers a cut of the sale to Google. In fact, 30% of the sale price is taken by Google. In 2014, for example, Google made about $3 billion from Play Store sales.[7]
Additionally, the Play Store offers music, movies, and books, for a fee.[7]

Google as a whole also sells some personal user data, so it is conceivable (though not known specifically) that some user data may be sold. Android is designed to push people to use Google's basic set of services (gmail, Google Drive, Google calendar, etc.) which gather private data, and also upload their complete contact lists, which are very valuable for marketing purposes. The native contact list application also suggests that users attach a photograph of each person to their contact entry. This could (if Google chose to do so) be used for facial recognition purposes. Many people keep a great deal of private information on their phones, and Google's business is based on the collection, use, and sale of private information. However, as an open source tool, the community is likely to take notice if Google takes this too far.

Android is named after desserts. Version history of Android builds: