From Conservapedia
(Redirected from Linux)
Jump to: navigation, search

Note: Linux redirects here to avoid confusion and excessive schismatic confusion. GNU/Linux" refers to either of:

GNU/Linux is a bit of a mouthful, and is usually what is referred to as simply Linux. There is a rather political debate in the GNU/Linux community as to what the operating system itself should be called. Technically it is GNU/Linux as Linux alone is simply a kernel and nobody really runs an operating system which is just a kernel.

Linux uses the GPL "copyleft" licensing format, which allows all users access to the source code of the entire operating system, from the kernel to the highest library layers. Most common software used in Linux operating systems are at least open source and preferably free and open source or FOSS, Free and Open Source Software.

Some people mistakenly believe that there is something communist, socialist, or otherwise liberal, about Linux. They point to the word "copyleft", and the fact that it's given away for free, as things might be expected to be in a socialist society. "Copyleft" is simply a play on the word "copyright", indicating that it is an alternative view of what copyright protection gives. (Briefly, the copyleft forbids copying other people's work for one's own profit, but otherwise allows copying.) Also, the Free Software Foundation repeatedly emphasizes that "free software" means "free as in free speech, not as in free beer." That is, no one is required to give away something that they worked on. But information, once published, can be distributed freely. Information gets distributed freely all the time. The web page you are looking at now is freely distributed information.

End users of free and open source software have the ability to view, modify, and repackage and redistribute modifications to the source code of the software. Not only can they do this, but these modifiers may call the new product their product entirely. It does not need to be credited to the previous coder, even if the modification is very slight. Because most of the GNU/Linux world from the operating system to its software and libraries are free and not for-profit, it has been correlated with Communism in the minds of some conservatives. In reality, this is a rather silly notion. If anything, it could be said that GNU/Linux extrapolates the good parts of Communism without the totalitarian elite dictatorship part. In its essence, Communism is a society without a centralized government, and Linux can represent "true" Communism just as well as "ideal" Libertarianism. All-in-all, it is a radical approach in relation to Microsoft and their for-profit model.

Almost ironically, GNU/Linux is the go-to operating system for servers in computing. Most web sites are hosted either on Linux or BSD servers. This is because both Linux and BSD are Unix-based and were intrinsically designed to handle secure networking from the get-go. Widows, on the other hand, was an addon to Microsoft Disk Operating System or DOS (MS-DOS), which was not a network-oriented platform. Henceforth, every version of Microsoft Windows has suffered major security exploits along with NSA-implemented backdoors. The Microsoft model of "security" is to leave back doors they know about in the OS and let the NSA have access to them for so long, before patching them and creating new backdoors.

Many would argue, whether conservative or a liberal, if one wants to avoid major security risks in their day-to-day computing, they should run a GNU/Linux distribution on their personal computer. Easy-to-install distributions include Ubuntu, Mint Solus, Manjaro, and Arch. (See Richard Stallman and his lectures available on YouTube for more information on the moral and ethical advantages of using GNU/Linux and avoiding non-free software at all costs.) Many many enterprises are switching to Linux every single day whether they are implementing it in a traffic meter or a school network system. GNU/Linux distributions are only lacking in two major areas compared with non-free Windows and Mac OS X:

The GNU/Linux operating system is free software created to replace the Unix operating system. The system aims towards POSIX compliance, though it is not officially compliant and therefore cannot bear the trademark "UNIX." The GNU project was started by programmer Richard Stallman and was the impetus behind the creation of the Free Software Foundation. Except for the small but essential kernel (called Linux after its creator, Finnish grad student Linus Torvalds), substantial components of the operating system code were created by Stallman and other FSF contributors. There's a dispute over whether the FSF should be credited when mentioning the use of Linux. The trade press refer to the overall system as "Linux", which annoys Stallman to no end. Essays on the FSF website promote the use of the term "GNU/Linux" when referring to a system with Linux kernel and GNU project core components.

The Linux kernel communicates with the hardware and provides for many complex and essential operations such as process scheduling, memory management and file system operation. This is required to support the needs of all applications run on the system (such as the graphical user interface, media players, and servers). Most of these applications are not part of the Linux kernel project, and are part of separate projects, including GNU, but those who are unaware of or not concerned about the history of the project commonly used "Linux" to refer to the whole operating system. The Linux kernel was initially developed by Linus Torvalds as an experimental project to run a UNIX-like system on x86-based PC hardware.

At this point, a very substantial portion of the software commonly used on a desktop system are not GNU software projects, such as KDE (graphical desktop environment), Firefox, OpenOffice.org, and Python (high-level programming language). On the other hand, even these popular products rely on basic services provided by GNU, such as the C runtime library (libc), compiler framework (gcc), and core POSIX command line utilities. Additionally, the GNU project includes several more substantial applications, such as the graphical desktop environment GNOME, which compete heavily with their alternatives.

GNU/Linux distinguishes itself from other operating systems such as proprietary UNIX and Microsoft Windows in that the source code for a complete working system is distributed under various open source licenses. In essence, this means that anybody can modify the code to their needs, and that the development most components happens in an open community, rather than in a closed commercial environment. Any improvements to the code will be contributed to the community, and any software that is based upon viral licenses will be, in turn, licenses under these. The Linux kernel itself is licensed under the GNU General Public License (GPL).

Numerous sources,[1][2] including Steve Ballmer,[3] one of the driving minds behind the success of Microsoft, have claimed that the Open Source movement is inherently Communist. They are apparently bothered that the rest of the world has created an operating system, that many consider superior to Windows, that people can obtain without putting money into Microsoft's pocket. This is like being annoyed that one's attempt to sell air for a profit has been undercut.

In 2005 Forbes.com posted an article estimating Linux ran 60% of the world's top supercomputers at that time.[4] In 2003 the IBM GNU/Linux Technology Center concluded that GNU/Linux has enterprise class reliability.[5] GNU/Linux servers can run without reboot for years as can usually be seen at the longest uptimes URL on Netcraft.com.[6] Another location to check on Linux uptime statistics is the Machine uptimes page at Linux Counter.

Owing to the nature of open source software, many variants of a GUN/Linux distribution may be created by using the original code and making changes to it to suit a particular need. For example, there is also an Ubuntu Christian Edition.[7] 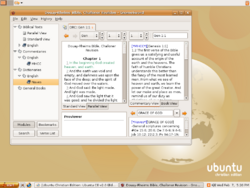 GNU/Linux is quite possibly becoming one of the most commonly adopted operating systems in the world. However, this is difficult to quantify with hard evidence since most Linux distributions are given away for "free" and there are few sales records or marketing numbers to review. While personal computers in the United States and other "first world nations" still overwhelmingly use Microsoft operating systems such as Windows XP, GNU/Linux is a common choice for web servers, file servers and embedded platforms, thanks to its perceived reliability, low/no cost, and the fact that modifications to the source code can readily be made by anyone. For example, Linux has seen widespread use in numerous mass-produced consumer electronic devices such as broadband residential routers, Digital Video Recorders, and cellphones.

As an example, in March 2007 the server hosting the Conservapedia web site was running the GNU/Linux operating system[8]

Linux as the 'Best of the Public'

The ongoing development of the GNU/Linux operating system represents perhaps the single most important example of the 'best of the public' collaboration model in the field of technology. The excellent stability and security of GNU/Linux, both in server and consumer versions, provide a powerful example of the success of this model.

Since development is oftentimes carried out by volunteers or enthusiasts, over the years Linux-based operating systems have received a handful of out-of-the-box features unseen in other operating systems. One such example is the concept of multi-seat, where one computer with multiple local keyboards, mice, and monitors can be simultaneously used by multiple people - each with independent logins, profiles, and security protected files.[9] Other operating systems either require third party software to add in this functionality,[10] have not had it built in and enabled, or this functionality is outright denied to the user.[11]

From its inception, it has been difficult to find new computers outside of the server market available with GNU/Linux pre-installed. Although specialty companies like System76 and Zareason do sell computers equipped with desktop versions of Linux (specifically Ubuntu), until recently, mainstream computer manufacturers like Dell and HP resisted this trend. Users typically need to download the GNU/Linux distribution of their choice and install it on a computer themselves. Because many home computer users find the installation of an operating system a difficult task, this added step hinders the increase in the number of computers using a desktop version of Linux. This situation drastically changed in 2007 when Dell started selling laptop and desktop computers to the general public with Linux pre-installed.[12]

During 2008, a new type of low cost laptop computer, the "netbook" was introduced by most of the major manufacturers. To keep costs down, Linux was offered on most of the lines as an alternative to Windows XP (Windows Vista being unable to run on the low powered computers), bringing GNU/Linux into the mainstream computer market for the first time.

GNU/Linux is in often referred to as GNU/Linux, because Linux is not an operating system unto itself, but rather another free component of a fully functioning GNU system made useful by the GNU corelibraries, shell utilities and vital system components comprising a full Operating System as defined by POSIX. Many computer users run a modified version of the GNU system every day, without realizing it. Through a peculiar turn of events, the version of GNU which is widely used today is often called "Linux", and many of its users are not aware that it is basically the GNU system, developed by the GNU Project. There really is a Linux, and these people are using it, but it is just a part of the system they use. Linux is actually the kernel, a minuscule program in the operating system that allocates the machine's resources to the other programs that you run. The kernel is an essential part of an operating system, but useless by itself; it can only function in the context of a complete operating system. Linux is normally used in combination with the GNU operating system: the whole system is basically GNU with Linux added, or GNU/Linux. Therefore, the so-called "Linux" distributions are really distributions of GNU/Linux.