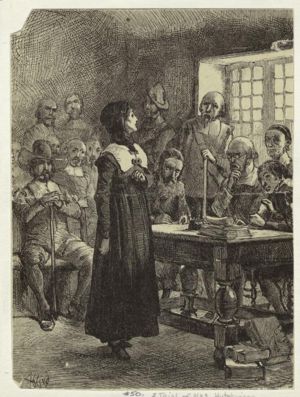 Anne Marbury Hutchinson (1591 – 1643) was a Puritan colonist who defied church leaders by teaching that ordinary people could interpret the Bible for themselves. Born as Anne Marbury[1] in the English village of Alford, she later settled in Massachusetts Bay Colony and began holding her own Christian meetings for women at her home in Boston, which were even attended by some men.

Hutchinson was put on trial twice in the Massachusetts Bay Colony, for heresy and for challenging government authority. Eventually, she was banished from the colony and she relocated to Rhode Island in 1638. Thirty-five families followed her when she left. She was killed by Indians on Long Island in 1643.