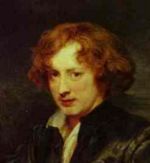 Anthony van Dyck Flemish painter, Rubens's pupil (born on March 22, 1599, in Antwerp - d. London on December 9, 1641). He was one of the most important and prolific portraitists of the 17th century. Influenced by painters like Titian, Paolo Veronese and Giovanni Bellini, he adopted colors of great richness.

In 1632 van Dyck had become the Court Painter of Charles I, King of England. There he was knighted. Van Dyck's style of portrait painting influenced English portraiture throughout the 18th century. Charles I King of England at the Hunt