The Flemish School of Painting

During the period from the 14th to the 17th century, Flanders (in the northern region of Belgium) produced an unbelievable amount of talented artists, including some men of absolute genius such as Jan Van Eyck, Rogier van der Weyden, Hieronymus Bosch, Pieter Bruegel the Elder, Peter Paul Rubens, Frans Hals and Antony van Dyck.[1]

Rubens, The Judgment of Paris. Flemish technique... the paintings glow with a sense of vitality that is seldom seen in more recent paintings. They have a quality that is often described as “jewel-like.” This is especially evident if you see them in person; it's easy to pick out the Flemish paintings from those done in other periods, or those from the same period done in other places. The precise detail and gorgeous colors are marvelous to look at.[2]

The early Flemish painters were the first to popularize the use of oil paint.

Flemish and Dutch artists were pioneers in the landscape genre. River Landscape with Wood Cutters by Jan Brueghel the Elder (son of Pieter Bruegel the Elder), 1608. 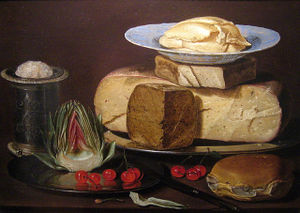