From Conservapedia
(Redirected from Landscape)
Jump to: navigation, search Landscape is used as a term in painting for a representation of a natural scenery of land or sea, usually extensive, actual or fancied. Landscapes have been painted since ancient times. The Greeks and Romans created wall paintings of landscapes. Asian painting has a remarkable landscape tradition; it has been called "China's greatest contribution to the world's art". Open-air painting was already an established tradition by the early nineteenth century. An influential treatise published in 1800 by Pierre-Henri de Valenciennes stressed the value of outdoor studies done quickly and with a broad sweep: "all études (studies) from Nature should be done within two hours at the outside, and if your effect is sunrise or a sunset, you should take no more than half an hour." [2]

Flemish and Dutch artists, pioneers in the landscape genre

Rubens, Landscape with the Château Steen, 1636.

Joachim Patinir, a Flemish Northern Renaissance painter is considered the first Western artist known to have specialized in landscape painting; a pioneer in this genre, however his landscapes are not a separate subject but supported by religious themes.

Dutch art saw landscapes as the medium that expressed pride in their country in the 17th century. Peter Paul Rubens, the most eminent representative of Flemish art, among a vast number of artists excelled in landscape as well as in portraiture, religious, mythological and allegorical subjects. Gillis van Coninxloo worked in a Mannerist style. Pieter van Laar developed his own style of landscape. Esaias van de Velde, Hercules Seghers, Jan van Goyen and Salomon van Ruysdael also were among the pioneers. Aelbert Cuyp was one of the most famous Dutch landscape painters of the Dutch Golden Age. Jacob van Ruisdael (or Ruysdael) was the greatest of all Dutch landscape painters; Van Ruisdael excelled in the painting of cloudscapes. Seventeenth-century Netherlanders had a passion for depictions of city and countryside, either real or imaginary. Local scenery asserted Holland’s national pride, while vistas of foreign sites recalled the extent of its overseas commerce. Holland’s ocean ports teemed with fishing and trading ships, and the tiny country’s merchant fleet was almost as large as all the rest of maritime Europe’s combined. [3]

Landscapes had initially been mostly backgrounds. 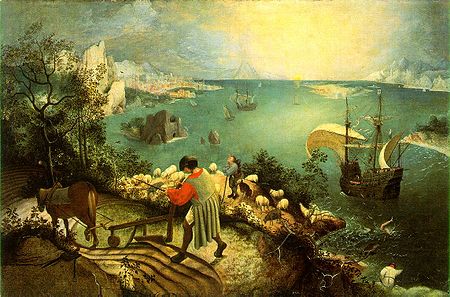 Pieter Bruegel the Elder, Landscape with the Fall of Icarus, ca. 1558. One of the best landscape artists of the mid-19th century, the Dutch painter and etcher Johan Barthold Jongkind was a highly influential pioneer of Impressionism, whose landscapes - notably atmospheric river and coastal scenes - had a major impact on his younger contemporaries, including Claude Monet (1840-1926). Edouard Manet (1832-83) considered him "the father of modern landscapes". [4] The classical landscape was perfected by French artists Nicolas Poussin and Claude Lorrain. Before them, outside of the Netherlands, the genre of landscape painting had yet to gain acceptance with the powerful art academies of Italy and France; landscapes were seen as inferior subjects for painting. Poussin came later in life to believe that landscapes could express the same powerful emotions as the human dramas depicted in history paintings. From that point on, he worked to elevate landscape to a higher status. [5]

Claude Lorrain, Capriccio with Ruins of the Roman Forum, ca. 1634.

In 1800, Pierre-Henri de Valenciennes published a book on landscape painting; This book and Valenciennes' works benefit greatly the next generation of landscape painters. In the 19th century landscape painting gained a new supremacy due to the artworks of painters of the Barbizon School such as Theodore Rousseau and Charles Daubigny, or the Revolutionary artist Gustave Courbet, who pushed the boundaries of landscape painting even further, and the Impressionists whom devoted most of their careers to studying and painting the landscape; The influence of Courbet extended well beyond Impressionism, impacting the work of Paul Cézanne and Vincent Van Gogh, as well as painters in the 20th century. Ibidem

Two English Romantic landscape painters, John Constable, and William Turner, contributed to elevate landscape painting genre. Constable's art expresses his response to his native English countryside. Turner was not only Britain's greatest painter but arguably the finest landscape and marine painter ever. [8] Turner created landscape paintings that are revolutionary even today. [9] Théodore Géricault also explored the Romantic landscape in a series of views representing different times of day; Scenes of shipwrecks culminated in 1819 with Théodore Gericault's strikingly original Raft of the Medusa [10], (Louvre). [11] Some considered the landscape painting as obsolete but it still has strength and vigor as may be seen in the following paintings.

In a sense, however, landscape never went away: It was just transformed into something unrecognizable, and has begun to emerge again in surprising places. The rise and fall of landscape painting tells an interesting story about art's relationship to the outside world over the last two centuries, and the ways the genre might be resurfacing today suggest just how unsettled our own relationship to nature has become." [12] The Joy of Winter by Clyde Aspevig. Vincent van Gogh, View of Arles with Irises in the Foreground, 1888.